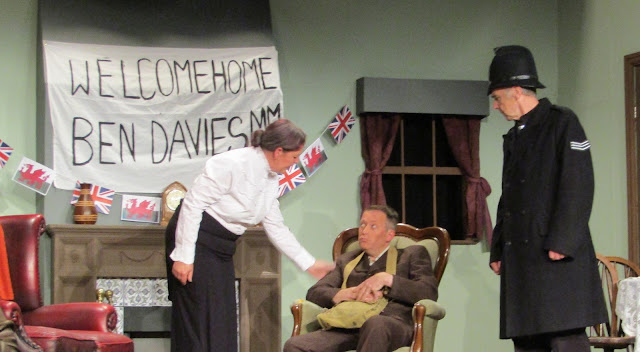 * A scene from Dinner With Otto.

While their young men fought and died in the appalling conditions of the Western Front during World War One few back home had the remotest idea of what they were enduring.

And when they returned from this living hell of mud and blood just the other side of the Channel it was rare for them to talk about what they had seen and done.

It is this painful reality which is at the heart of Dinner With Otto, the new play being premiered by Llangollen Twenty Club at the Town Hall with a three-night run starting this Thursday evening and running on Friday and Saturday too.

llanblogger has been given a preview of the production which is surely one of the most absorbing and evocative representations of the “war to end wars” ever to take to the stage.

Written by Tom George, who clearly has a deep understanding of the period, it is surely the most powerful and challenging production ever undertaken by the club, which has had to completely switch focus away from its usual easy-to-watch material to do it full justice.

And this they have certainly achieved to produce an outstanding piece of heavy drama which wouldn’t look out of place on a professional stage.

The action opens in March 1919, just months after the Armistice, when hosts of young men, deeply troubled by what they had been forced to experience, returned to what they had been cynically promised would be a “land fit for heroes”.

But it was a land totally unprepared to handle what would now be termed as PTSD, or post-traumatic stress disorder. These days there is sympathetic treatment available but back then it was a case of just put it behind you and get on with it.

One man who can’t do that is 23-year-old Ben Davies who comes back to his small Welsh village deeply damaged and with a head full of horror, the nature and depth of which is slowly bled out of him during the course of the play.

This is a mammoth part in terms of the complexity and depth required. But it is handled impeccably by Si Kneale who rings every ounce of emotion out of it, even the totally contextual swearing.

The rest of the cast aren’t just there to sympathise with what the war has done to him because they must be exposed and put through the ringer for the part they have played in creating the hell which Ben and thousands of other returning soldiers like him have been put through over four years - the war profiteer, the religious hypocrite, the patriotic fool.

Chief culprit in the town mayor, Cllr Thomas, portrayed with all due pomposity and bigotry by Twenty Club favourite Arwel Jarvis.

His fellow councillor, Helen Elliot Jones, who on the face of it is a mother grieving for the loss of her only son Aled in the blood-filled trenches but is actually something infinitely more repugnant, is stylishly brought to life by Jo Lloyd.

Ianto Morris, much more sinister a figure than the hapless local street sweeper, is extremely well presented by Neil Evans.

Similar helpings of talent are brought to bear by Paula Hardy as Ben’s loving mum Sarah, Hannah Edwards as his would-be girlfriend Megan, David Connolly as village bobby Sergeant Jenkins and Twenty Club debutante Mike Connolly in the role of local vicar, the Rev Ivor Williams, doing a very passable Welsh accent for a chap actually from the south of England.

This is a poignant tale delving deep into a facet of this dreadful war not told often enough and the cast, directed tightly and wisely by Lyn Aston, have interpreted it with a degree of sheer professionalism that is simply superb.

* Tickets are available from Courtyard Books, Gwyn Davies Butchers and Jenni's Llangollen, or
online: www.skiddle.com
Posted by llanblogger at 11:01 AM