Have your say on the town at Centenary Square tomorrow 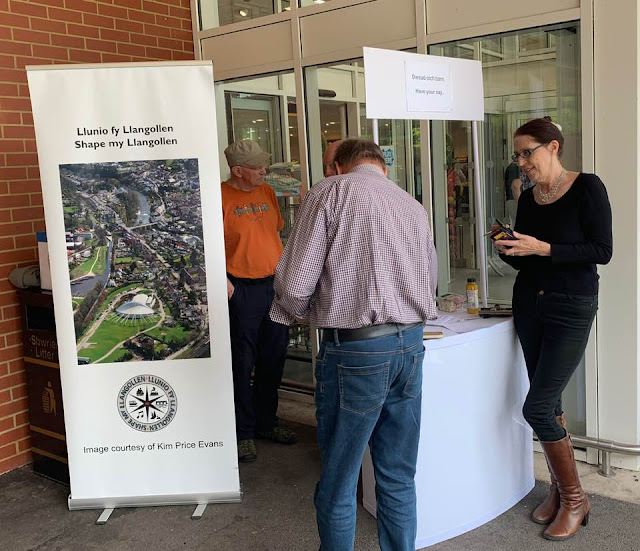 * The Shape My Llangollen team outside Home Bargains last week.

The last in a series of public consultation exercises by the team of volunteers putting together Llangollen’s contribution to the county council’s next Local Development Plan will be held tomorrow (Saturday).

During May the team has been hosting a series of consultation events to introduce themselves to the public and to get their views.

The second successful session was held outside the Co-op store in Regent Street on May 13 when, again, SML gained lots of useful responses from shoppers.

The third question-and-answer session was held outside the Home Bargains store, next to Aldi, on May 23 and it was once again a huge hit with those who took part.

To round off the process in style, the final session will be held in Centenary Square tomorrow from 10am-5pm.

Just to give the event a party atmosphere, there will be live music from local performers Chris Burton and SML member Charlie Jones throughout the day.

SML chair Phil Robinson said: "We'd be delighted if as many people as possible could come and see us on the square.

"The three consultation sessions we've held so far have produced some fantastic answers from the people who were kind enough to spare us a few minutes of their time.

"This feedback will be invaluable in preparing our final report by the autumn.

"The whole consultation process is a fantastic example of the people of this town having their say on some vital issues and I'd like to thank everyone who has contributed so far.

"I can give a hint that the top three hot topics to date have been parking and traffic problems but people might have other things they'd like to mention to us."

People unable to make it to the meet-the-public sessions can fill in one of the question sheets which are available in the Town Hall office.

They can also jot down the answers in a reply to the posting about the health centre session on the Shape My Llangollen Facebook page.
Posted by llanblogger at 4:05 PM