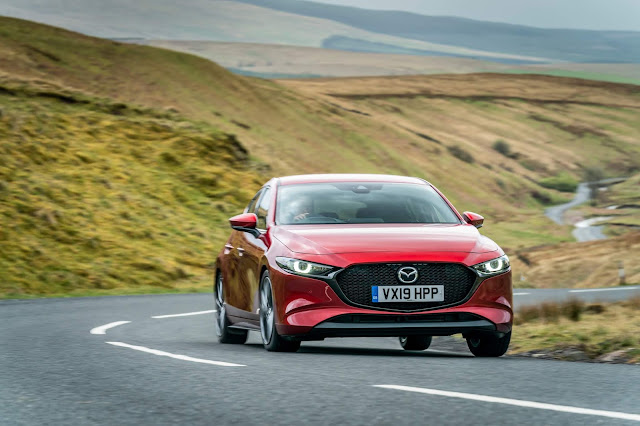 * The new Mazda3, front and profile. 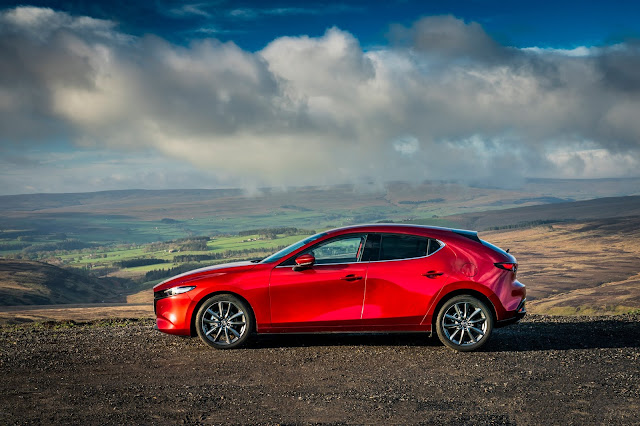 It has baffled car makers for decades but Mazda reckons it cracked the age old problem of building a petrol engine with the power and economy of a diesel.

The 2-litre SkyActive-X is being hailed as ground breaking and has the backing of Bath University Professor Jamie Turner, one of the foremost authorities on the combustion engine, who believes Mazda has achieved something he thought impossible.

The key is the use of a highly lean mixture of fuel and air fired by compression rather than a spark plug which is the norm in modern diesel engines. That should improve economy by 20 per cent and give up to 30 per cent more torque which significantly closes the gap on a diesel.

This was the headline news at the launch of the new Mazda3 hatchback, but turned into a bit of a damp squid because the new engine won't arrive until October when the saloon is launched.

That's a blow because the new model's engine range is limited to a revamped 2-litre petrol and 1.8 litre diesel neither of which is good enough to worry the top contenders in the C-sector which is still ruled by Ford Focus and Volkswagen Golf.

That aside this fourth generation Mazda3 can ruffle the feathers of the big two if this new engine lives up to its promise. Jeremy Thomson, the company's UK boss described the new hatchback as a substantial step up so it is clear he also has an eye on the premium sector where Mercedes-Benz A-Class and Audi A3 have a strong following.

The 3 is heading in the right direction with its eye catching styling and up market interior where soft leathers and tactile switches give it that quality feel.

A closer look at the cabin shows it is well laid out with the majority of functions like navigation, phone and radio are housed in an 8.8 inch central display controlled from a decent sized rotary switch behind the gear stick.

I've always found the Mazda system easy to follow and the same applies here, but it is also good that the heating functions are separate with their own switches. One minor flaw is the lack of lighting for the switches which are set flat in the centre console and difficult to pick out in daylight.

The three dial binnacle could not be more clearly laid out with the larger central speedo computer generated. A head up display for speed, traffic sign recognition, navigation instructions and cruise control completes the picture.

In the back rear legroom is just on par and I can see some passengers finding it a bit dark given the shallow rear windows but that is a penalty of sharp styling. Drivers will find rear vision poor for the same reason but all bar the entry model has a camera so there will be no concerns when reversing.

As with all Mazdas the suspension favours enthusiastic driving; if you want super soft look elsewhere, but for me this is a good compromise.

To the engines. Mazda predicts 85 per cent of sales going to petrol, a monumental turnaround compared to five years ago, but it is a similar story whichever company you look at.

For now the starting point is the familiar 120bhp 2-litre but it has been modified with cylinder deactivation and a mild hybrid electric motor to improve economy.

Even driven hard on some deserted Scottish roads we still topped 40mpg which proves there is more to come, but it lacks power, mainly in the mid range, so the new engine with 177bhp is needed to satisfy drivers craving performance.

Normally I would be directing readers to the diesel but not this time. I still don't understand why diesel is getting such a bad press but there are a couple of reasons why the current petrol is the better option.

The difference in economy is only 11mpg in favour of the diesel and given the price at the pumps and a whopping £1,800 premium over the 2-litre petrol it has become a no brainer.

That said there will be a pirce premium for the SkyActiv-X engine so hard decisions will have to be made.