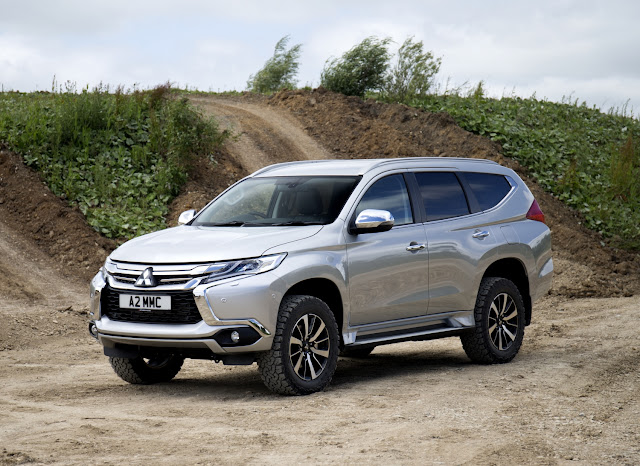 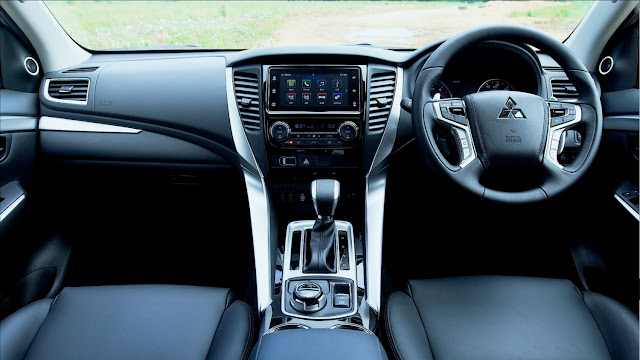 * The interior of the Sport.

We have been waiting a while, a long while, for something to happen on the Mitsubishi Shogun front and here it is.

But this is not a new Shogun, well not quite. The big SUV, loved by farmers and anyone else needing serious off road capability which could also double as family wheels, is dead and buried, its place taken by Shogun Sport which is back in Britain after an absence of 11 years.

The Sport will do the same job as its big brother but without the boxy looks of the old style Chelsea tractor.

It is a bit shorter than Shogun (about 115mm) but is still a substantial seven seat SUV taking some of its styling cues from the trendy Eclipse Cross and goes up against the likes of Toyota Land Cruiser, Land Rover Discovery Sport, Hyundai Santa Fe and Kia Sorento.

Shogun Sport is completely new, sitting on the L200 chassis but with multi link rear suspension so it does not ride like a pick up. Instead of the old 3.2 litre diesel powering Shogun, the Sport has a more efficient 2.4 litre turbo diesel mated to a new eight speed automatic which will be standard on both trim levels.

How does it measure up against the opposition?

The last car I drove before Shogun Sport was the Kia Sorento and against the Korean it comes up second in most departments. Even though Shogun benefits from car like suspension it is still a bit too agricultural in its road manners.

The ride is unsettled on most surfaces and is far too restless on rougher surfaced minor roads. That harsh ride may well be a penalty of Shogun Sport's off road prowess which is second to none in this league.

The Mitsubishi press team had part of a working quarry in Gloucestershire turned into a treacherous off road course and was one of the most, if not the most demanding 4x4 challenges I have undertaking in 30 years.

We went up and down what looked like impossible gradients, waded through deep water and drove a virtual 'wall of death' to show off the Shogun Sports impressive capabilities.

It has the lot when it comes to off roading, four wheel drive with high and low gearing, a locking rear differential, four terrain control settings - we tackled all bar snow - and a brilliant hill descent system. I would not have risked a Kia Sorento on this escapade!

Inside Shogun Sport pretty much copies Eclipse Cross and is solidly built, no creaks or rattles, although some of the plastics do not feel as up market as the Kia and are some way off the Disco Sport which is hardly surprising given the Land Rover's price tag.

Like the Eclipse there is no built in satellite navigation so it is down to owners linking their smart phones to the command centre and using apps, including Google Maps, for directions. We used it for the launch driving route and apart from the odd late instruction worked pretty well. It is another of those things you have to get used to before being entirely convinced.

Shogun Sport is only offered with a diesel engine which makes total sense for this type of vehicle. The auto box helps keep things smooth but it loses out to Sorento on both performance and economy, and emissions of 227g/km are on the high side.

No one will complain about the room - there is plenty of it even in the third row although a slight rise in the floor causes a knees-up. Entry to the third row is easy as the middle row seats fold completely forward opening a wide entry point.

On balance I would prefer the second row sitting on runners which creates flexibility on legroom. The downside is a tighter squeeze into the back row.

There is loads of carrying capacity in a five seat configuration and a vast area opens up with all back seats flat and will be ideal for transporting surfboards and such like. Later this year Mitsubishi will bring out a commercial model with the back seats stripped out.

Both models, Sport 3 and Sport 4 come in under the important £40k road tax barrier and are well equipped with full leather, eight speed auto gearbox and trailer stability assist on the basic kit list. Another two grand (level 4) brings in luxuries like heated seats, better sound system and a 360 degree camera. There is also a full suite of safety features but it would have been good to have seen some on level three.

There is no doubt Shogun Sport is in the zone with its off road prowess and if that is important then there is no better place to go but if ride comfort is top of the list then Kia Sorento is a better option.