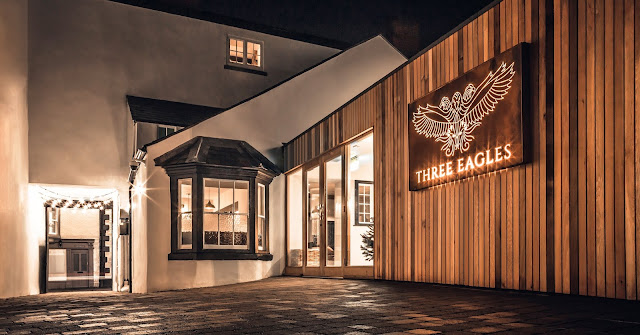 * The Three Eagles following the renovation.

The Property Developments division of Wrexham-based Knights Construction Group has been shortlisted for this year’s Insider Wales Property Awards.

Their entry project for award category Workplace Design of the Year is the full renovation of Llangollen’s grade-listed Three Eagles Restaurant & Bar which was completed at the end of last year.

An early 18th century coaching inn, the building was in a derelict state and had stood unused for over a year when it was taken over by new owners.

Knights Construction were soon enlisted to undertake a full renovation of the building, enabling it to be used as the new luxury restaurant. The renovation included a re-design of some of the building’s main layout and the construction of a brand new, state-of-the-art kitchen.

Following the renovation and the subsequent opening of the restaurant, the end product has garnered many plaudits from guests for the quality and attention to detail in the overall renovation.

The awards event, hosted at Cardiff City Hall, celebrates Wales’ best commercial and residential property developments as well as associated funders/developers from throughout the past year.

Knights Property Developments manager Joel Smith said that to make the shortlist for this particular award is a testament to the collaborative efforts of the entire project team.

“The Three Eagles renovation was a really special project for us to take on and to be shortlisted for the Insider Wales Property Awards is an exciting moment for the entire team”, he said.

“There are many unique challenges that come with working on listed buildings such as satisfying the relevant heritage governing body with a thorough and well-planned design concept and of course the sensitive approach needed to repair ancient existing structures.

"Many traditional trades were utilised in the Three Eagles renovation to ensure that the original building was restored in a way that is respectful to its heritage. With the addition of the new extension to the rear of the building, the old now seamlessly meets the new and the result is absolutely stunning."

According to the firm, one particular challenge that arose during the construction works was the surprising discovery of an ancient seven-metre-deep well under the building.

The well was situated under a section of the original building that was demolished to make way for the new kitchen and this threw up the opportunity for an unexpected alteration to the design. In the end, the well was built-up with matching stone, sealed with a glass panel and illuminated and now stands as an extremely popular feature in the entrance of the new venue.

Mr Smith said: “We’re very proud of what we’ve achieved with the Three Eagles building because the project has taken a venue that was very old, disused and neglected and turned it into a thriving, luxury social hub for the town of Llangollen. The building now stands proud again as it most likely once did many years ago”.

The awards ceremony will take place on Thursday, June 13.

* To find out more about the renovation go to: https://www.knightsconstructiongroup.co.uk/grade-listed-restaurant-renovation/
Posted by llanblogger at 9:47 AM