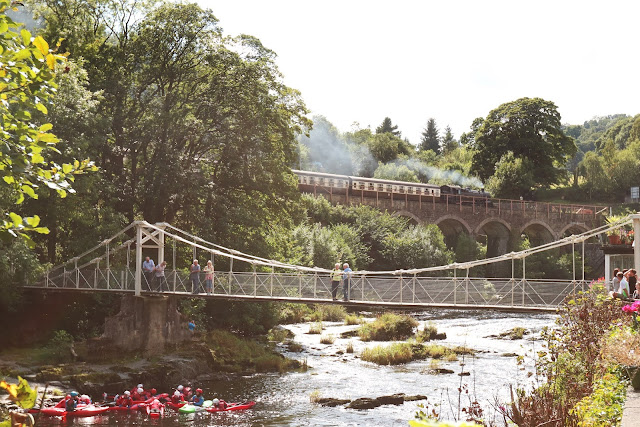 * The Chain Bridge in Llangollen features in the new campaign.

A new film, photographs and a suite of brand-new digital maps showcasing the North East Wales region have been released as part of Visit Wales’ Year of Discovery campaign.

Denbighshire, Wrexham and Flintshire have joined forces to produce the marketing resources to inspire local people and visitors to experience the region.

The film, which premiered at the recent North Wales Tourism Annual Trade Meeting, explores the region’s tourism offer including key attractions like Greenfield Valley, Chirk Castle and SC2 in Rhyl as well as the rural and coastal landscapes of Moel Famau and Talacre Beach.

For outdoor adventure enthusiasts, it showcases mountain biking in Nercwys Forest and OnePlanet Adventure, Llandegla and kayaking on the River Dee in Llangollen.

The film kicks off with the impressive Pontcysyllte Aqueduct & Canal, which is celebrating its 10 year anniversary since the inscription of the UNESCO World Heritage Site.

This film is the start of a series of new mini films which will be released throughout the year, featuring different themes including coast, castles, landscape, culture, adventure and the World Heritage Site.

A gallery of professional images have also been released to help draw new and repeat visits to the region all year round.

Tourism plays a vital part in the regions’ economy, with a total economic impact in 2017 of £867m and over 11 million visits made.

Ian Lebbon, Chair of Denbighshire Destination Management Partnership, said: “With the main tourism season upon us; it’s great to see Denbighshire, Flintshire & Wrexham working together to launch a variety of professional marketing materials to showcase the region during the Year of Discovery. We would encourage businesses to use the resources available to them to create greater awareness of the region and boost the local economy throughout the year.”

Seven new digital maps exploring a variety of locations across both North East Wales have also been produced. The maps interlink with the 75-mile North Wales Way – one of three national tourism routes launched by Visit Wales under The Wales Way brand. The new maps have been a community-effort, as businesses were invited to workshops across North Wales to discuss their ideas for new tourist routes to help promote the region and provide loops and detours off The North Wales Way.

* To view the maps and photographs and for further information on the region, please visit www.northeastwales.wales
Posted by llanblogger at 6:41 AM