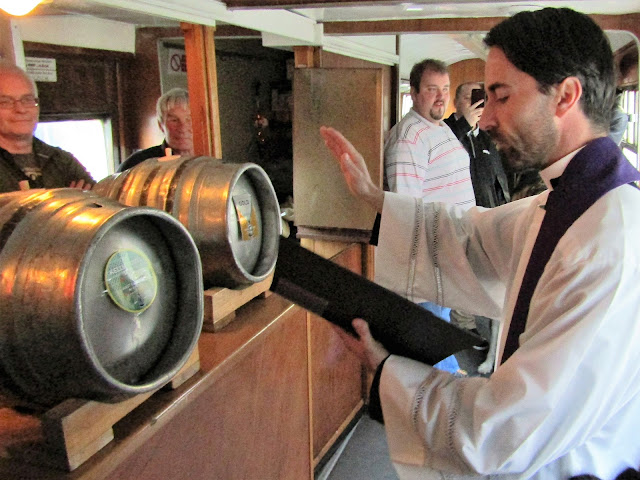 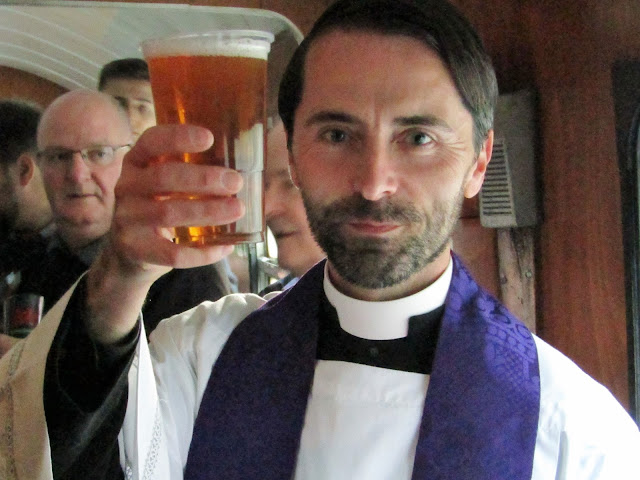 * The vicar says cheers to the train as it pulls out of the station.

Llangollen's new vicar gave a blessing to the beer aboard a real ale train just before it steamed out of the town’s heritage railway station yesterday (Saturday) evening.

Father Lee Taylor, who took over at St Collen’s and three other churches in the Valle Crucis Mission Area last Christmas, believes that reviving the ancient ceremony which goes back to medieval times is a good way of taking the church out into the community.

So as the steam train prepared to leave the platform Father Lee was on hand in his full regalia to say some specially chosen words over the local brews that were about to be downed by a trainload of real ale lovers.

He said: “Back in medieval times it wasn’t unusual for priests to be called upon to bless all sorts of things, such as cheese, workmen’s tools or crops planted for harvest.

“It’s a way of the church responding to various activities in the community and a fun way of celebrating something that’s very good.”

Father Lee, whose mother was landlady at a couple of pubs back in his native Lancashire, added: “The beer blessing itself goes back to 1614 and inaugurated in the time of Pope Pius V.

"There also a link with St Collen's because on the church roof is a depiction of a men with barrels.

“I performed the ritual in English and used holy water and incense in the ceremony.

“Saint Arnold of Soissons, whose feast day is on August 14, and Saint Arnulf of Metz, whose day is on July 18, are both patron saints of beer and hop-pickers, so if any pubs or hotels in Llangollen would like their beer blessed on those days then let me know."

Earlier in the day he had been on BBC Radio Wales to explain what he was going to do and a TV camera crew were at the station to record the blessing.

This wasn't be the first time that Father Lee, who later joined travellers in a couple of pints himself, had carried out his beer blessing ceremony.

Back in 2016 he hit the national headlines when he blessed the casks at his local pub when he was part of the clergy team at Croydon Minster in London.

And soon after he arrived in Llangollen a gathering of parishioners and friends watched him bless his new vicarage in Abbey Road.

She said: “This is a great idea. We are so pleased that Lee took out to re-enact an age old tradition. Everyone on the train enjoyed it very much.”
Posted by llanblogger at 8:29 AM