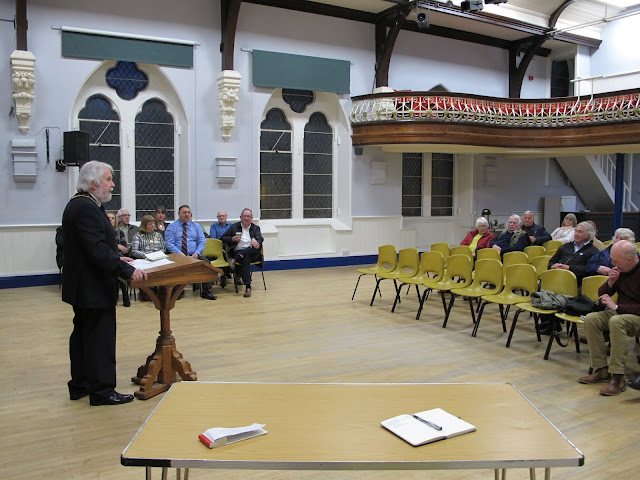 * The mayor, Cllr Jon Haddy, addresses the town meeting.
Llangollen Town Council has had a busy year during which it opened the new Centenary Square and embarked on a major project to properly repair the Town Hall.
That was the message from the Mayor, Cllr Jon Haddy, to members of the public who turned up to hear his annual progress report at the town hall last night (Thursday).
Cllr Haddy described the opening of the new square at the junction of Bridge Street and Castle Street during eisteddod week last July as a “grand success” and said that within an hour of the contractors moving out the new facility was already in use as a performance area for a group of visiting dancers from the eisteddfod.
He explained that the original plan for the square had included more seating along the back wall but this had been temporarily shelved when the council ran out of cash to complete it.
However, he said that with enough money now available the planned extra seating was expected to be added in the near future.
One of the outstanding uses of the square, he said, had been the poppy wall produced and erected by a dedicated band of volunteers led by Cllr Sheena Grindley to mark the centenary of the end of World War One last November.
This, said Cllr Haddy, had been a “sensation” and had brought people into the town specifically to see it.
Another milestone during the year, he explained, had been the formation by the Town Council of the Shape My Llangollen whose group of volunteers and town councillors was gathering the views of the community on what Llangollen people wanted to see in Denbighshire County Council’s next Local Development Plan.
The mayor also noted the achievement of Llangollen of officially becoming a plastic-free town and adopting a single-use plastic policy under the auspices of the council’s Cittaslow Committee.
During the year the council had assumed full ownership of the facelifted Chain Bridge after Llantysilio Community Council had relinquished its 50 per cent share of the tourist attraction on the River Dee.
The Town Council had also resumed its community grants scheme, which during the year had seen a dozen community groups each benefit from £500 cash awards.
The major project now being undertaken by the council, he said, was the restoration of the town hall to a proper state of repair.
The council took over ownership of the building from the county six years ago, paying just a £1 for it. However, a number of urgent maintenance issues were now presenting themselves.
Leaks from the roof and subsequent water ingress had recently cost many thousands of pounds to repair but further structural problems were now cropping up which needed attention, said Cllr Haddy.
That was why the council had budgeted to spend a further £35,000 on repairs over the next three years to cover repairs to the roof, the electrics and fire alarm.


To raise the necessary cash the mayor said it had been decided to raise the town council’s share of the council tax bill – known as the precept – by £15.71 for the forthcoming financial year.
“We all thought this way the best way forward,” he explained.
“We also did this to raise money to do Centenary Square. If we had borrowed the money for the town hall we’d have been playing financial chase-up.”
He added: “Here in Llangollen we do raise money, we do spend it and spend it wisely and so far the results have been quite good.”
When he threw open the floor to questions, it was pointed out by an audience member that Llangollen was set to introduce the highest council tax rise in Denbighshire at 26.6 per cent and asked why the town council couldn’t be “more honest” about how much people were having to pay in its announcements about the precept.
Cllr Haddy admitted the town was now the most expensive in the county but explained that other areas had a comparatively larger population from which to raise tax revenue.
He said: “We need the extra money to pay for the repairs to the town hall and we are not raising money for the fun of it. Once that job is complete the precept will fall back.”
He added that the town hall had been taken over from the county to preserve a major local asset which was heavily used by the local community and would therefore be a “massive loss” if it was not available.
The mayor dealt with further questions about:
* Who was responsible for cleaning Centenary Square – it is the town council.
* The empty shop which the council owns at the front of the town hall – it is due to be leased in the next few weeks
* The state of repair of Llangollen Bridge – replying a “it is a county council responsibility but as far as we know it is fit for purpose.”

Posted by llanblogger at 7:49 AM