Site survey for 'pocket park' near Llan goes ahead 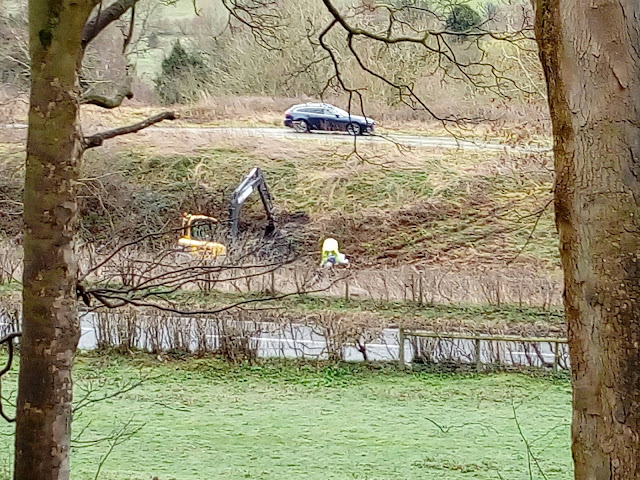 * Activity on the site near the former civic amenity site spotted last week.

A site survey is being carried out on land which is the subject of a planning application for a "pocket park" on one of the main gateways to Llangollen.

The county council-owned land off the A539 was the area's civic amenity site until its closure in the late 1990s.

In 2017 the Clwydian Range and Dee Valley Area of Outstanding Natural Beauty Team on behalf of the Our Picturesque Landscape Partnership applied for permission to create the park.

According to the original application, which is still under consideration, this would see paths, tracks and parking for 36 cars.

Late last week activity was spotted on the site by llanblogger. A small digger was operating and a man in high-viz jacket appeared to be taking land samples. A car was parked nearby.

A spokesman for Denbighshire County Council said: "We are in the process of carrying out a topographical survey and soil sampling to get a better understanding of the site.


"The planning application for the site is still being considered."

According to the original development brief, the park plan includes landscaping, tree planting, wildflower meadows and hedgerow planting with the aim of increasing the biodiversity and ecological value of the site.

Work was also to be done to eradicate the small stand of Japanese knotweed said to be present on site.


Paths, tracks and parking for 36 cars would be landscaped and screened to minimise any visual impact on the surrounding landscape and immediate site neighbours.
Improved site access/egress was a key part of the proposals. Adjacent landowners and the county’s highways department had been consulted.


Access to the site would be available for pedestrians and cyclists along pavement from Llangollen to the west and the canal to the east, a bus stop is also located adjacent to the site, providing easy access to the site to users by an alternative means to the car.

The planning brief said: “The proposed new park would be developed along with community groups and other interested parties over a number of years and as this will take time, the ethos for this initial phase was to create a welcoming site for people to enjoy both in its own right but also as a gateway to the wider area.

“The plan has been developed as part of a Heritage Lottery Fund – Landscape Partnership Scheme bid and as part of this process consultation with stakeholders and communities has been ongoing.

“The site is seen as a key gateway into Llangollen and the wider Dee Valley, it will provide a new access point for the Pontcysyllte Aqueduct and Canal World Heritage Site and the Area of Outstanding Natural Beauty, promoting wider exploration of the area and a longer stay.”
Posted by llanblogger at 6:40 AM