No cause established for massive mountain fire 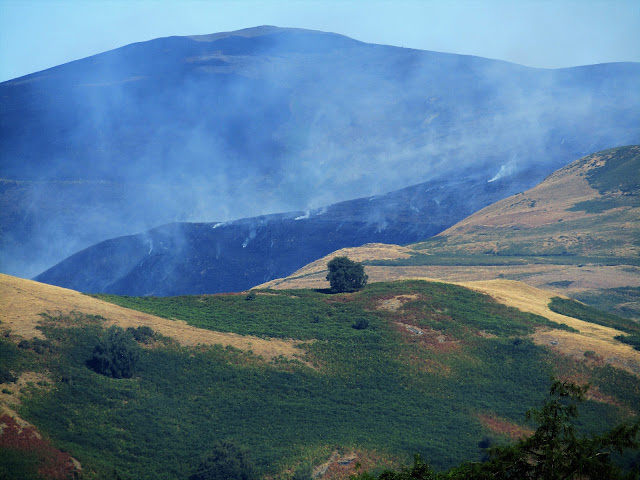 No cause has yet been found for the massive fire which devastated a huge area of the mountainside above Llangollen last summer.


A senior fire officer told a special meeting of Denbighshire County Council’s Communities Scrutiny Committee held yesterday at the Pavilion to examine the seasons for the blaze and its effects on local communities that he was not prepared to speculate on the cause.

The fire burned on and off for a total of 68 days from July 19 until September 25 and damaged around 700 acres of Llantysilio Mountain which is a site of Special Scientific Interest.

At some stage firefighters from every part of north Wales were drawn in to fight the smoke and flames.

Over a full day the committee took evidence from every public agency involved in the huge operation and also heard from residents and businesses in the affected area.

It was made clear at the outset that the aim was for the meeting to be an exchange of information and not to attach blame to anyone for what happened.

A report will now be drawn up which will look at whether any lessons can be learned from the incident.

Richard Fairhead, assistant chief fire officer for North Wales Fire and Rescue Service, was asked during his interview by the committee if the cause of the fire had been determined and whether it might have been controlled burning.

He replied: “It is too difficult to know what exactly caused the fire and I wouldn’t like to speculate,” adding, “a controlled burn it wasn’t.”

Later in the day the spokesman for an organisation representing sheep farmers issued the grim warning that unless there was more co-operation between those with an interest in the mountainside a similar fire could happen again.

A landowners’ representative claimed that if it had been hit “hard and fast” early on what started as a small future would not have turned into a large incident.

Going further into the situation his officers had found on the mountainside Mr Fairhead said it had been “one of the largest and most challenging” incidents ever to break out in north Wales, reigniting several times during its course.

He said it had presented a number of health and safety issues for his crews, including battling their way on foot through smouldering vegetation and driving all-terrain vehicles across the mountainsides. Three operational vehicles had rolled over which he said was something that had never been encountered before.

Apart from flames there had been large volumes of smoke, which was the reason why the Ponderosa Café had to be evacuated rather than being under threat from the flames.

Firebreaks had eventually been cut to allow the fire to be brought under control, he explained.

Mr Fairhead was asked whether the service had considered using aircraft to fight the fire but he said this had not been considered a viable option as water dropped from the air tended to roll off hillsides rather than sinking into the vegetation.

He was also questioned on why the army wasn’t called in to help fight the fire as it had been more recently on Saddleworth Moor.

Llandrillo county councillor Mabon Ap Gwnfor, who raised the issue, said he had been told this had been ruled out on cost grounds.

Mr Fairhead replied that the army was only asked to assist when an incident was beyond the capability of a fire service to cope and this case it hadn’t been. He said this was the reason rather than finances.

The day began with Natural Resources Wales showing drone footage of the seat of the fire near the road known as the Conquering Hero which runs across the mountain. Much of the land in this area was reduced to ash and sand.

Gwyn Rowlands representing the Horseshoe Pass Graziers’ Association said in his written submission to the committee that the fire service was reluctant to involve members in any way, with all offers of assistance, including water supplies and the cutting of fire breaks with their own machinery, had been declined.

He said it has also been perceived that many of the firefighters lacked experience in dealing with such incidents.

Mr Rowlands also pointed out that as a result of economic factors grazier numbers were reducing leading to reduced manpower available for routine habitat management.

He added that graziers would like to see the cutting or burning of firebreaks reintroduced.

He also referred to the association’s belief that a co-operative policy should be drawn up and agreed between all parties with interests in managing Llantysilio Mountain and other areas.

During the meeting he told the committee: “There needs to be a change of attitude and somebody needs to get on with doing something.

“I’ve not heard anyone say today they made mistakes but mistakes must have been made because we’re all human.

“I’d like to see someone taking a lead role, talking to farmers and learning from them, or this fire is going to happen again.”

He finished his submission to a round of applause from members of the public in the audience.
William Shuttleworth, landowners’ agent for Llantysilio Estates, said: “What started as a small fire, if it had been hit hard and fast, would not have turned into a large incident.”

He also said he understood that the cutting of firebreaks had been refused because of doing damage to the Special Scientific Interest site.

Referring to the firefighters, he said: “Many of those attending had little or no experience of dealing with mountain fires and the estate is hoping to allow access for on-site training for the fire brigade and others.”

He added that the consequence of less sheep and less grazing on the mountain was that the undergrowth was growing.

A major player in the fire operation was Natural Resources Wales, which is a category one responder to major incidents such as this.

Its Denbighshire team leader Bethan Beech replied to the first of many questions on the issue of firebreaks and their effect on the course of the fire, which came from Llangollen county councillor Melvyn Mile.

He suggested he had heard it suggested that if enough breaks of sufficient width had been cut at an early stage this could have prevented the spread of the fire. He also said he had been told local people had offered to do this but had been declined permission.

Ms Beech said she knew of no approach to cut the breaks other than from the fire service later during the course of the incident.

Llangollen’s other county council Graham Timms asked Ms Beech to confirm the period of when controlled burning was allowed. This, she said, was between October 1 and March 1, which meant the fire began outside this timeframe.

She added that NRW had never refused permission to anyone on Llantysilio Mountain to carry out a burn during the specified period.

The committee then turned to the issue of public access to the fire area, with County Cllr Holland saying firefighters had been amazed to see people coming towards them out of the smoke when the blaze was at its height.

Ms Beech replied that there was not much could be done about this, although the fire service had put out a plea for people not to go up there to see the fire.

Committee chair County Cllr Huw Williams asked if permission had to be obtained from NRW to dig firebreaks in such an incident and whether granting it was a lengthy bureaucratic process.

Ms Beech replied that her agency had had an officer on site at all times during the fire who would have been able to give an immediate answer.

Questioned on whether better management of the land in this area would have made the fire less likely to have broken out, she said: “More management needs to be done in many areas of Wales, including Llantysilio. We need to work with local graziers.”

Cllr Timms asked a number of questions to various agency representatives about information for the public about how the fire was progressing and being tackled.

Nick Thomas of NRW said the fire service had been in charge of issuing information and that the press officers of the various agencies had taken their leads from them.

Questioned about firebreaks and offers by people in the area to cut them, Mr Fairhead said: “There were several offers which the incident commander did consider but had to decline on the grounds of people’s safety and welfare.”

Asked by County Cllr Mile if he was satisfied that personnel taking over on shift changes had been fully briefed on the situation confronting them, he said: “They were briefed and took part in a full reconnaissance of the area before taking over.”

He described as “unhelpful” the incorrect messages posted on social media about the fire and the way it was being fought.

Neal Cuff, manager of the Regional Emergency Planning Service, was asked by Martyn Holland, county councillor for Llanarmon-yn-lal/Llandegla, if as a result of the fire a combined action plan for all the agencies to work from would be prepared and whether this would be made public.

Mr Cuff said such a plan was currently being prepared but could not give a definitive answer to when this might be published.

Chief Inspector Andrew Williams of North Wales Police was asked by County Cllr Merfyn Parry of Llandyrnog if the cause of the fire had been established and, if so, any charges had been brought.
He answered: “My understanding is that this is not the case and I am not aware of any suggestion of a criminal act. I am not aware of any criminal investigation.”

Rhys Hughes of Llantysilio Community Council and a former Llangollen county councillor said: "It was a catastrophic fire. Imagine the main road into Rhyl being shut on and off for a month, how would businesses there react?
“This was the hottest summer in a very long time. What a hot summer brings is a harvest for the tourist industry, they don't always get one and there were about half a dozen businesses in the area that had to close because of this fire."
Posted by llanblogger at 10:06 AM