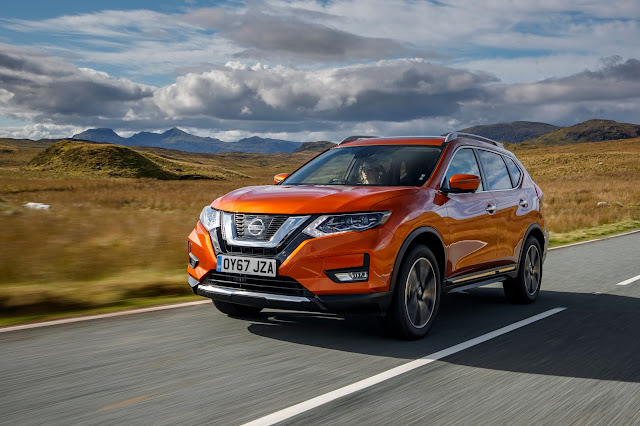 First thought when I looked at the front of the Nissan X-Trail was the film Gladiator.


Yes, strange one that but the facelifted X-Trail has got that aggressive, ready for combat look about it. It was the thick, gleaming chrome draped across its nose which brought to mind Russell Crowe kitted out in his shiny battle armour before leading his Roman legion against the barbarians.


Probably best to move on, this is getting a bit too deep.


X-Trail is a proper, rugged SUV and has been around longer than the majority of its rivals. Nissan has done its best to keep pace with the hordes of newcomers and it is the changes to the front that have made the most impact. The dominant V grille and spikey new headlights make this a mean machine.


All of which has turned X-Trail into a longer Qashqai but able to offer seven seats and that is no bad thing.


To be honest my expectations were not that high having driven three of its closest competitors in as many months. They are all new so bang up to date on design and everything else that goes in making a top SUV. Kia Sorento is the most practical seven seater, Skoda Kodiaq the best to drive, and the Peugeot 5008 is just brilliant at everything. Could the Nissan get close?


It is a big ask, too big actually, but that doesn't put X-Trail out of the running. As I have said before margins are fine when choosing a car and a lot of people are happy with the Nissan. It is damn good value against those mentioned and the one I would choose for serious off roading.

It is set up for a comfortable ride which means the suspension will protect occupants against our many poor road surfaces. The downside is body control becomes a tad ragged when pushed through bends, but if that is your bag buy a sports car.


X-Trail is a big SUV and that means lots of space for legs and luggage. Mine was the five seater so the boot is sizeable and very practical with out of site storage in a section used for a third row of seats, and reversible rubber/fabric floor mat.


The facelift brought some interior upgrades but a full makeover is needed to bring it up to the standard of the front runners. Compared to Kodiaq and 5008 the X-Trail's cabin is looking dated but the fittings are solid and there were no rattles or creaks.


There is a choice of petrol and diesel engines and my guess is the majority would favour the 173bhp 2-litre turbo diesel. Good choice if refinement and extra grunt is needed but for me the 1.6 diesel does the job admirably. There is nothing to fear here when it comes to performance and its economy will raise eyebrows.


Okay, the power band is narrow and it sounds harsh as the revs mount, but I never felt short changed when overtaking and noise levels are perfectly acceptable when cruising. The best bit is a smidgen over 50mpg after a week and 470 miles. That is a terrific return for such a big four wheel drive car.

My N Connecta is near the top of the range and is well equipped with substantial safety and comfort packages. My favourite: the 360deg camera, great for parking in tight spots. And I liked the double USB socket for the second row. A small detail may be but very useful these days.

All in all X-Trail was much better than I expected and is good value. But I am afraid it still comes fourth behind the three mentioned at the start.