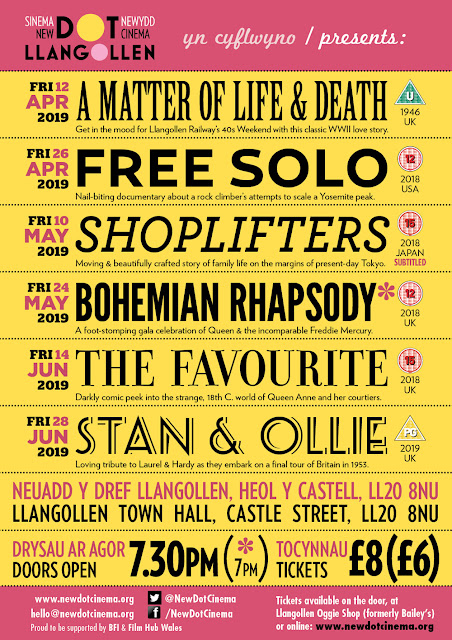 The cinema's big gala screening will be Bohemian Rhapsody on Friday, May 24 which volunteers reckon should be a brilliant way to start the bank holiday weekend.

The new programme also includes Oscar-winning The Favourite, Stan and Ollie, the exhilarating Oscar-winning documentary Free Solo, in which brave man pits himself against big mountain without a rope, and the Japanese film, Shoplifters, about a dysfunctional but loving family of shoplifters who rescue a small girl and unleash all sorts of chaos as a result.

The first film in the season, the British wartime classic A Matter of Life and Death, is being screened the night before Llangollen Railway's 1940s Home Front weekend, to help get everyone in the mood.

More details, trailers and tickets are available on the website http://newdotcinema.org/dot/.

Posters giving details of the programme are due to be distributed around town from early next week.

* Gales Wine Bar are now offering a 10% discount to early bird diners who are going to a New Dot screening, or other events in Llangollen.

The promotion starts tonight Friday with the screening of Cold War.

Gales will be open from 5pm  and diners just have to show their ticket (online or paper versions) to get the discount. More details on Gales' Facebook page.
Posted by llanblogger at 6:24 AM