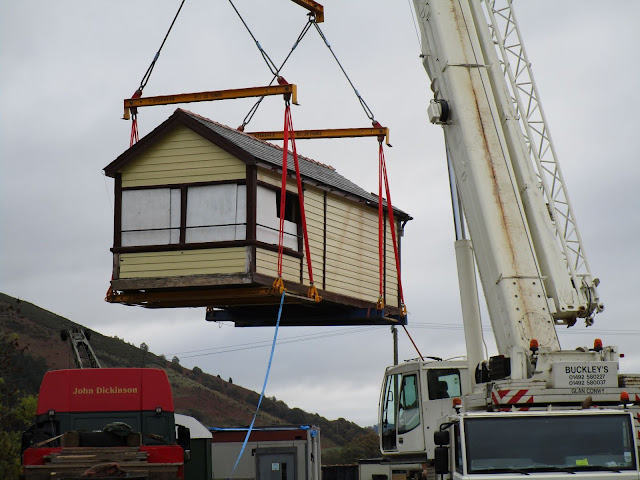 * The new signalbox is lowered into place at the Corwen end of the line.

Speaking in the chamber during this week’s Business Statement, Mr Isherwood outlined the work that has been completed to date by volunteers, but said additional funding is required to complete the project.

Raising the matter when calling for a Welsh Government Statement on support for standard gauge heritage railways in Wales, he said: “I've been asked to bring to the attention of elected representatives an article in the Denbighshire Free Press earlier this month on Llangollen Railway's Corwen project.

"This said that volunteers building the link between two Denbighshire towns say they need £10,000 to finally complete the project. They've completed 10 miles of the line between Llangollen and Corwen since trains stopped running 45 years ago, a platform has been created, but a gap remains in the embankment between the new station in Corwen and the rest of the line, and the aim is to fill that gap.

“The project for the terminal is costing about £1 million. Approximately £600,000 has been down to the work of volunteers, and they want to, hopefully, complete this before the summer season, because attracting people to join the train at Corwen is essential and the town will benefit from the additional visitors too.

“If I could call for a statement on support for our standard gauge heritage railways - because we know the Welsh Government does support our narrow gauge heritage railways - and applaud and see how we can support that massive volunteering effort, which is not only delivering heritage projects, but also offering so much to the tourism and broader economies of areas that so much need that stimulus.”

Responding, the Minister for Finance and Trefnydd, Rebecca Evans AM, said: “I will make sure that the appropriate Minister writes to you regarding the standard gauge heritage railways, but I will take this opportunity to join you in congratulating the volunteers on the work that they do in order to preserve this part of our heritage and our history, and also to promote and enhance tourism.”
Posted by llanblogger at 7:33 AM