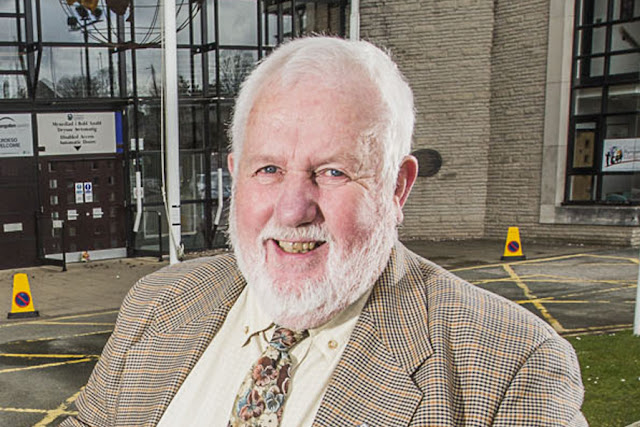 * The late Colin Loughlin whose funeral was held at Pentrebychan crematorium.

Hundreds of people turned out to pay their last respects to the saviour of Llangollen Food Festival – and heard it had just been named as one of the best eight events of its type in the UK.

There was standing room only at the Pentrebychan crematorium near Wrexham for the funeral of Colin Loughlin who died aged 76 from a suspected heart attack.


The service was conducted by the Rev Andrew Sully who served as the Vicar of Llangollen, Trevor and Llantysilio for more than a decade until moving to Llandudno last summer.

Appropriately, donations in lieu of flowers were accepted to pay for a defibrillator for a new boat being launched by the Vale of Llangollen Canal Boat Trust which Colin supported for many years.

In 2011 Colin came to rescue when the previous organisers of the festival pulled the plug and he was elected chairman of a committee of volunteers who revived the event which has gone from strength.

Colin’s contribution as the chair of the festival committee has been celebrated with a painting of him in a mural on the side of the Llangollen pavilion where the event is held every October.

A native of Wrexham, Colin ran a wine distribution company called Whitehouse Wines in Coedpoeth before going into business with Lorraine Hughes.

They bought an existing company called Megan’s Kitchen which makes Welsh Cakes.
Lorraine continued to run the business after Colin retired five years ago, before stepping down as festival committee chair in 2016.

She said: “Colin was a force of nature and an irreplaceable character but his legacy will live on in the form of Llangollen Food Festival which he was instrumental in saving and ensuring that it thrived and prospered.

“So much so, that the festival has now received another accolade from the Redonline website and been hailed as one of the best eight food festivals in the UK.”

The eulogy at the funeral was delivered by long-time friend Bob Jaques who is also the treasurer of the food festival committee.

Bob said: “After Colin moved to Llangollen he quickly became a well-loved member of the community and, when the organiser of the Llangollen Festival withdrew, Colin formed a committee of friends to continue the event.

“He became Chairman and the committee successfully took over the running of this annual event for many years, which very soon became one of the top ten Food Festivals in the UK.

“He eventually resigned as Chair but very soon was persuaded to return to the committee in order that his vast knowledge and experience should not be lost.

“Away from work Colin enjoyed all types of sport including rugby, motor racing and sailing.  He was a member and played for Wrexham Rugby Club and made many lifelong friends.

“He joined some colleagues from Table who had started a project to build a canal boat specially adapted for people with disabilities which became the Vale of Llangollen Canal Boat Trust.

“This first boat, Myfanwy, was built by apprentices at Camel Lairds shipyard and provided memorable days out for thousands.

“Many years and three boats later the Trust is currently building a new boat which will be launched in the Summer and today, donations in memory of Colin will go towards buying a defibrillator for this new boat.

“We will all, I know, have many memories of Col, his love of wine, his love of cars, particularly his Triumph Vitesse which is parked outside this afternoon thanks to its proud new owner Brian Owen.

After the service, fellow committee member Pip Gale, of Gales Wine Bar and Hotel, added: “Colin was hugely popular and so well respected so his passing came as a huge shock to us all.

“Quite simply, the food festival would not exist today were it not for the enthusiasm and leadership shown by Colin.

“He is a massive loss to the town of Llangollen in general and the food festival in particular but he will always be remembered with great fondness.”
Posted by llanblogger at 6:42 AM