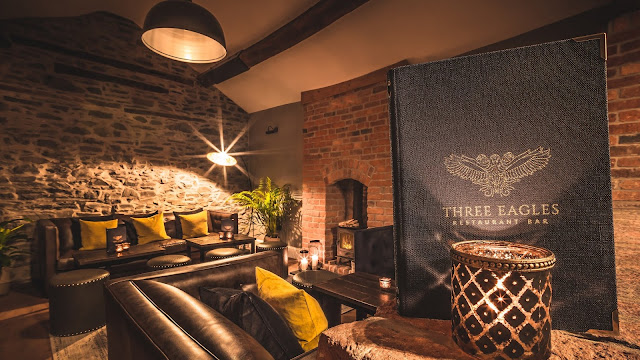 * The interior of the new business.

The Three Eagles Restaurant & Bar in Llangollen will have its official opening this Friday.

The event is set to host a number of invited guests, including Welsh Labour’s Minister for Economy and Transport Ken Skates as well as local business owners, investors and members of the press.

Attendees to the event will be given a tour of the ancient building which has been subject to a major renovation and will also be offered the opportunity to experience first-hand the culinary talents of acclaimed executive chef Adam Gaunt-Evans.

Matt Jones is the managing director of One Hundred Knights, the hospitality group behind the Three Eagles and exclusive wedding venue, Tyn Dwr Hall.

He will be on hand to deliver a talk on the success of the business which will be followed by a "major announcement"’ that the group says will have "a significant impact both regionally and nationally".

The Three Eagles first opened its doors to customers at the very end of last December.

“Up to now, the whole team involved with the Three Eagles have been working tirelessly to ensure that the business has been able to get up to the standard we have wanted to set from the outset” said Mr Jones.

“We’ve seen a great response to the business locally and we are seeing evidence that guests are being attracted from across North Wales and from over the border region to come and dine here.”

“Holding the Official Opening Event on the 29th will be a really great way to properly mark the already very promising beginning to the Three Eagles story. To share this moment with some of the most respected people in the area and other local businessmen and women will be a real honour.”

Mr Jones said he is now very keen to reveal One Hundred Knights’ future plans and anticipates a high level of interest to come from the next development.

“Myself and the team are unbelievably excited about the next step we’re about to take and we really can’t wait to share the news about it with our guests”, he added. “I think the plans that we have in store are very impressive.”
Posted by llanblogger at 6:45 AM