Eisteddfod's first choir is back for encore 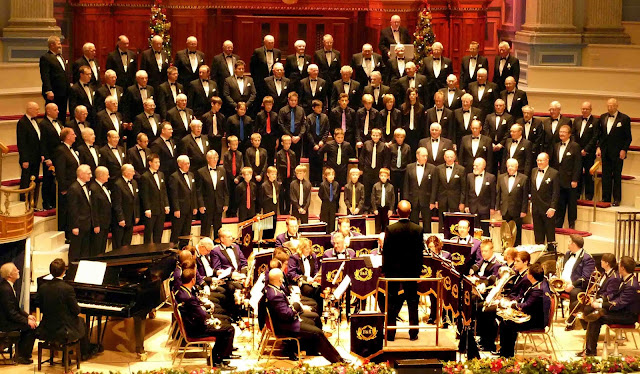 The first ever choir to sing at the world-famous Llangollen International Music Eisteddfod is to make a symbolic return to celebrate the festival’s 70th year.
The Colne Valley Male Voice Choir, based in Huddersfield, has scooped six titles at the historic festival over the years as well as five second places and two third prizes – but back in 1947 they missed out.
The 70-strong choir, which was founded in Slaithwaite in 1922, was the first to take to the Eisteddfod stage in 1947 and it was up against choirs from Hungary, the eventual winners, Spain, Italy, Denmark and Holland as well as Wales and England.
Now, seven decades later, representatives from the choir have been invited as special guests to the Choir of the World finals at the 70th staging of the iconic festival.

It will mark a symbolic return for the choir which has enjoyed a long relationship with the festival where the great tenor Luciano Pavarotti made his first international bow as part of the Chorus Rossini from Modena in 1955.

The Choir of the World competition is now for the Pavarotti Trophy and although Colne Valley missed out on a prize in that first year, they went on to claim a hat-trick of wins in the 1960s and have become one of the UK’s most successful male voice choirs with a host of titles at home and abroad.
They have sung without music shets since Thom Meredith became the Musical Director as a 23-year-old in 1989 so they have performed more than 300 different songs from memory in 26 years – a feat unlikely to have been replicated elsewhere.
Eisteddfod Musical Director Eilir Owen Griffiths said: “We’d be delighted to see the Colne Valley Choir here at the Eisteddfod again.
“They are part of the history of the event and there will always be a welcome in Llangollen for the choir which started the great tradition of the Choir of the World competition.”
Returning to Llangollen will bring back happy memories for David Hirst, the second longest-serving member of the choir who joined aged 22 in November 1960 – just a few months after the first Llangollen success.
“Obviously, we have a special association with the Llangollen International Musical Eisteddfod and it would be quite an honour to return”, he said.
“As well as being the first male choir to sing at the Festival, there was a hat-trick of wins in 1960, 1961, 1962 and altogether there have been six wins, five seconds and two third prizes in the 23 visits by the Choir since 1947. Quite an achievement when you were up against 19 or 20 choirs.
“Meeting the other choirs and making friends is an important part of it all. We have had exchange concert visits with Welsh and other choirs through competing and it is a great way get to know people. There’s lots of camaraderie among choir singers.
“We hold the competition very dear and we’re still very proud of the fact that we were the first male choir to sing there.”
The Choir, which rehearses in Slaithwaite Conservative Club on Monday evenings, has only ever had five conductors during its 93 years of existence. The longest-serving was George Stead who led the Choir for 44 years and wrote the very popular Psalm 126 which is regularly performed by male voice choirs across the country.
Every year the choir holds an annual Christmas Festival concert at Huddersfield Town Hall attended by more than 1,000 people.

“We are very much both a competition and a concert choir. We believe that by entering competitions, it is a sure and proven way to maintain and indeed, improve on the already high standards of the Choir,” said David.
“At the moment there are 72 full members and normally at weekly rehearsals and in concert we average around 60 singers. There’s a great camaraderie within the Choir and it is great seeing your friends every week.”
The Choir’s official accompanist is Keith Swallow, a celebrated solo pianist in his own right, who has been in the role since 1957. The longest-serving member is the Rev John Radcliffe, who joined the same year and is also the Choir Chaplain. The youngest singer is Tom Law, 24, while Frank Littlewood is the oldest at 86.
They have toured France, Germany, Ireland, Czechoslovakia and the USA, some of them exchange visits with choirs arising through relationships built at Llangollen.
In California in 1984 they experienced an earthquake which measured 6.2 on the Richter scale. The headline of the local newspaper’s review of the previous evening’s concert performance read ‘English Choir moved the Earth’.
“The Choir has performed with leading singers from opera and the Concert stage and has also sung in front of the Queen as part of massed choir at Leeds Town Hall. Many of the Choir’s present concerts have top brass bands as guest artistes” said David.
In recent years the Choir has competed and performed at the biennial Cornwall International Male Vocal Choral Festival where it has won the large choir class twice and in May they were also awarded trophies as the Festival’s Best Large Choir and the Overall Best UK Choir.
The Llangollen International Music Eisteddfod has been held every summer since 1947 and is recognised as one of the world’s most inspirational music festivals.
Next year’s event, the 70th to be held, will feature star names Bryn Terfel, Katherine Jenkins and Jools Holland and his Rhythm and Blues Orchestra who will bring the curtain down on the festival on Sunday, July 10.
* For more information go to http://international-eisteddfod.co.uk/
Posted by llanblogger at 8:14 AM