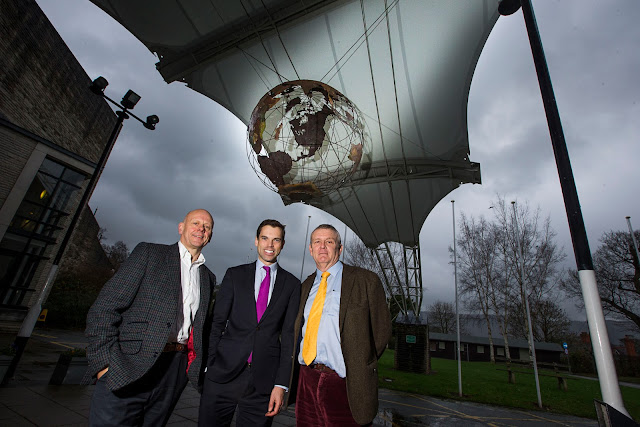 * Dr Rhys Davies, Llangollen International Musical
Eisteddfod chairman (right), with Mario Kreft and Ken Skates AM.
AN ICONIC competition to find the world's best young singers has been given a massive boost by a pioneering care organisation.
Pendine Park has agreed to more than triple the prize money up for grabs in the prestigious Voice of the Future competition at the Llangollen International Musical Eisteddfod.
According to the festival's Musical Director, Eilir Owen Griffiths, increasing the annual prize to £5,000 from 2017 onwards will "catapult the competition into a whole new league".
He said: "This is a truly remarkable gesture which will lead to a big surge in interest for new vocal talent.
"The timing is especially appropriate as we will be celebrating our 70th anniversary in 2017 and looking forward to an even brighter future.
The announcement about Pendine Park's sizeable financial contribution was made by Ken Skates, the Welsh Government’s Deputy Minister for Culture, Sport and Tourism.
Mr Skates, the Clwyd South AM, said: “It’s a fantastic, incredibly generous investment by a very well-respected and responsible employer.
“I believe that in Wales we need to have what I call the 'Martini arts' because they are available any time, any place and anywhere.
“Pendine is helping to deliver this in a social care setting, and I toast their success.”
Voice of the Future is one of the main highlights of the International Eisteddfod, which each year attracts competitors and visitors from across the globe.
The competition is open to young soloists under the age of 28 and the prize money – now up from £1,500 to £5,000 thanks to Pendine Park– is intended to help them advance their professional career.
The prize also includes the chance to perform at future festival concerts.
During the two-day competition, singers are required to deliver a contrasting programme of up to eight minutes of music, including oratorio, opera, lieder and song, performed in its original language.
In the final competitors must present a programme of music lasting up to 10 minutes.
Eirlys Myfanwy Davies, winner of the Voice of the Future title in 2014, will share the stage with opera legend Bryn Terfel when he stars at a glittering evening concert on July 7.
The concert marking the Eisteddfod’s 70th is also being sponsored by Pendine Park and will also star the supremely talented Maltese opera colleague Joseph Calleja whose voice has been compared to the legendary Caruso.
Pendine proprietor Mario Kreft said after the announcement of the £5,000 prize: "The ethos of the Eisteddfod chimes perfectly with what my wife, Gill, and I are doing at Pendine Park.
“I firmly believe in the vital role played by music and arts in social care and as part of our enrichment programme for people with dementia we regularly have world-class musicians from the Hallé orchestra and Welsh National Opera as part of our enrichment workshops and staff training and development programme.
“For some years now we have supported evening concerts at the Llangollen International Musical Eisteddfod and we want to provide further impetus to this unique festival and the Voice of the Future Competition in particular by increasing the prize money available to the winner."
He added: “The message of the Eisteddfod about the importance of peace and harmony is as relevant today as it's ever been.
"We're absolutely delighted to be giving this extra support to the Eisteddfod as  on Children’s Day at last year’s festival we will never forget seeing over 800 young people from local schools taking part in music workshops we hosted with members of the Welsh National Opera.
“As Terry Waite, who is President of the Eisteddfod, has often said, there is nothing more important than giving good memories to young people."
Eisteddfod Musical Director, Eilir Owen Griffiths, said: “It’s fantastic that Pendine Park is continuing its support for the festival by offering this £5,000 prize money for Voice of the Future after previously sponsoring our evening concerts.
“I know the difference this money will make in drawing in a much larger number of applications for this competition.
“I previously ran a similar competition in another part of Wales and when the prize money was increased the number of applications actually tripled."
Festival chairman Dr Rhys Davies added: “This is an extraordinarily generous contribution from Pendine Park and the prize money on offer will help to support the training of the young singer who is chosen as the winner.
“The competition is equally important is providing a stage for the singing stars of tomorrow and that is why it was created.”
Posted by llanblogger at 6:52 AM