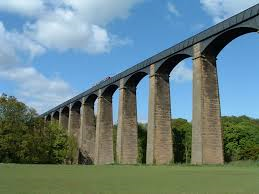 Pontcysyllte  Aqueduct near Llangollen has been shortlisted in 2015/16 Heritage Site of the Year awards run by BBC Countryfile Magazine.

PONTCYSYLLTE AQUEDUCT, WREXHAM
This engineering masterpiece was Britain’s longest, highest aqueduct when one of my heroes, Thomas Telford, completed it in 1805. A UNESCO World Heritage site, it still carries the Llangollen canal over the Dee Valley in a 307m-long cast-iron trough, held by 19 pillars of 30m. Cross by narrow boat or on foot – you’ll need a head for heights.

DUNLUCE CASTLE, COUNTY ANTRIM
The ruins of this magnificent medieval fortress perch on top of the steep, sheer cliffs of a rocky promontory along the gorgeous Antrim coast. Not far away is the Giant’s Causeway, so two top heritage sites in one! The views are stunning, its bloody history is well told, and fans of Game of Thrones may recognise it as the seat of the House of Greyjoy.

WHITBY, NORTH YORKSHIRE
The scene of childhood holidays to which I never tire of returning. History is round every quaint corner. Captain Cook lived here and explored Australia in the Whitby- built HMS Endeavour; it was Bram Stoker’s backdrop for Dracula; and at the top of its famous 199 steps stand the dramatic remains of Whitby’s Benedictine abbey, dominating the skyline.

HADRIAN’S WALL
Having trekked along parts of it through landscapes seemingly as wild as when the Emperor ordered it to be built in AD 122, how could I exclude this 73-mile wonder? Stretching from the Solway Firth to Wallsend (of course) it remains a lasting achievement of Roman endeavour. Together with the Antonine Wall, 100 miles north, they make up one of Britain’s 25 world heritage sites.


STOKESAY CASTLE, SHROPSHIRE
My favourite little gem from the Middle Ages (and not due to family links – long-past owners the Earls of Craven were no relation!). Too small to be a real castle, it’s defined by English Heritage as “quite simply the finest, best-preserved fortified medieval manor house in England”. On seeing it, I promptly fell for its charms, which have changed little since it was built in the late 13th-century.

Clwyd South AM Ken Skates, who is also Deputy Tourism Minister, said: “We are incredibly lucky in Clwyd South to have two National Trust sites as well as the magnificent Pontcysyllte Aqueduct, the first trans-national UNESCO World Heritage Site.

“The aqueduct is an engineering masterpiece and stretches for 11 miles through some of the most important industrial heritage anywhere in the world.

“I’m delighted Pontcysyllte Aqueduct has been recognised and nominated for this award by the BBC and such a tremendously well-respected broadcaster as John Craven, and I would encourage my constituents to vote and help ensure another success story for Clwyd South.

You can vote for the winner here: