Cost of policing rises by 9p a week 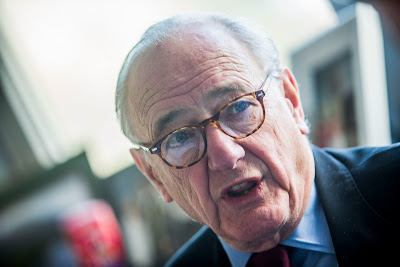 The cost of policing North Wales is going up by just 9p a week for the average householder.
The two per cent increase asked for by North Wales Police and Crime Commissioner Winston Roddick (pictured) was agreed earlier this week by the North Wales Police and Crime Panel.
It amounts to a rise of £4.68 a year a Band D property which will now pay £240.12 for annual policing.
It comes despite over £24 million in cuts to the North Wales Police budget over the past five years and with the prospect of £7.3 million in cuts to come over the next four years.
The meeting also heard that planned cutbacks to the number of Police Community Support Officers had been put on hold.
According to Cllr Philip Evans JP, a member of Conwy County Borough Council, what the commissioner had achieved in the face of cutbacks was "miraculous".
He said: "Winston deserves full marks. The increase is commendable considering the circumstances."
Mr Roddick welcomed the spending review by the Chancellor of the Exchequer, George Osbourne, which ruled out further cuts to the policing budget this year but he added that North Wales Police still faced a very challenging financial climate.
He said: “I believe that our budget once again balances financial prudence and enabling North Wales Police to keep North Wales a safe place to live, work and visit.
“It means that working in effective partnership has become even more important and has a high priority in my revised police and crime plan on which the precept is based.
“That is not only to assist North Wales Police and its partners in overcoming our financial challenges but also in delivering my other three priorities, preventing crime and anti-social behaviour, delivering an effective response and reducing harm and the risk of harm.
“Working in partnership enables responses to be more effective and lasting in their benefit to the community than they otherwise would be. It also reduces demand and increases the capacity of frontline staff.
“We must meet the challenges of the growing demands on policing which now include child sexual exploitation and cyber crime while the most recent terrorist attacks in Paris and elsewhere mean that a region with a major port also has heightened anti-terrorism responsibilities.
"It is also vital that we respond appropriately and factor in future cutbacks amounting to over £7 million over the next four years.
“When taking into account the £24m of savings already made, a further minimum saving of £7m represents a very significant challenge and one which will lead to changes in the way policing is carried out in North Wales.
“We have made the decision not to draw upon our reserves because of the need to safeguard future policing by investing in much-needed new police stations at Wrexham and Llandudno and by continued recruiting to maintain front line numbers which would otherwise be reduced by retirements.
"As a result I am satisfied we will be able to police North Wales effectively although it will be a greater challenge.
"In future we will need to achieve even greater value for money and there is more work to be done in terms of collaborating more with other forces to ensure we make the best use of the resources at our disposal.
“The latest cuts do not include a reduction in Police Community Service Officers as was originally anticipated and this increase of two per cent does give North Wales Police the balance between protecting the service and affordability.
“I have held discussions with the Chief Constable who has confirmed that the increase provides a budget to enable the operational delivery of the policing service in 2016/17.”
Posted by llanblogger at 6:51 AM