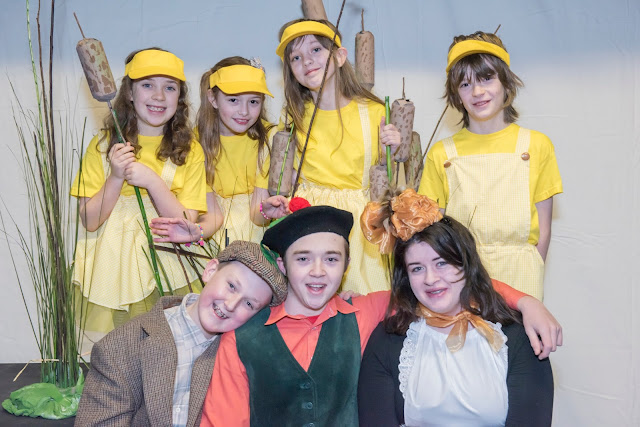 * Back row,  from left: Little ducklings played by Kate Reardon, Connie Richardson, Maisie Ansloos and Charlie Priestley. Front row: Ugly (Shea Ferron), Drake their dad (Jac Edwards) and  Ida, their  mum (Amy Jones).
FORTY youngsters from Llangollen and surrounding areas are to show off their theatrical talents in a modern re-working of the story of the Ugly Duckling. 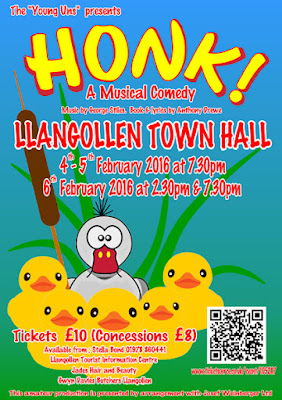 Honk! is an award-winning British musical comedy, which will be performed by Llangollen Young Uns from February 4-6 at the Town Hall.
The show’s producer, Pamela Williams from Chirk, said: “We are delighted to have such a talented and committed group of youngsters to bring you an exciting and moving show.
“The story of the Ugly Duckling is well known but this musical version gives a modern, hilarious and deeply touching interpretation to the fairy tale.
"The script is witty and the music is wonderful and we think it will appeal to an audience of all ages.”

The Young 'Uns are Llangollen Operatic Society's junior section and welcome youngsters from aged six to 18 years.
Members are drawn, not only from Llangollen but  also areas including Corwen, Glyn Ceiriog, Wrexham and Chirk.
This is the 26th production from Young Uns with previous shows including Half a Sixpence, Annie and Beauty and the Beast.
Amongst the cast is rising star  Cassius Hackforth from Ysgol Dinas Bran in Llangollen.
He joined Young Uns four years ago and has regularly played leading roles. In Honk! he’s the comic character, Bullfrog.
Cassius is about to perform with a professional company in Rhyl  and is looking to gain future accreditation in performing arts and musical theatre through the National Youth Music Theatre scheme.

Playing the part of Ugly the duckling is Shea Ferron, from St Joseph's Catholic and Anglican High School, who was an outstanding shop-boy in the Young Uns' past production of Half a Sixpence.

Amy Jones, from Ysgol Dinas Bran, takes on the role of Ida, the mother of Ugly and the other ducklings.

She has been with Young 'Uns for four years and played a variety of roles. She is studying drama at A level and hopes to become a writer, editor or stage director.

Jac Edwards, another Ysgol Dinas Bran student, takes the part of Drake, father of the ducklings and often unreliable husband of Ida.

Honk! is on at Llangollen Town Hall from February 4-6, including a Saturday matinee.
* Tickets are available from Llangollen Tourist Information Centre, Jades Hair and Beauty, Gwyn Davies Butchers and Stella Bond on 01978 860441 or online at: www.ticketsource.co.uk/event/105287
Posted by llanblogger at 6:43 AM