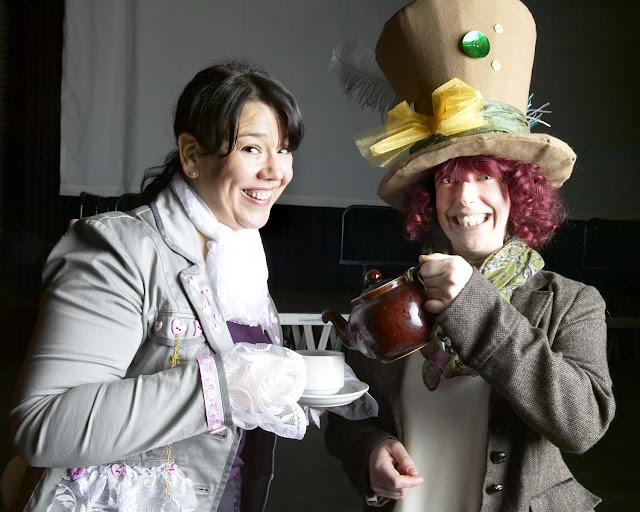 * Tessa Orton Jones, left, as the Ace of Spades and Jo Potts as the Mad Hatter.

SCENES from around Llangollen will feature in this year's town pantomime, as the local group stages Alice in Wonderland.


Final rehearsals are underway for the show which opens at Llangollen Pavilion on Thursday, January 14 for five performances.


It's the first time Llangollen Pantomime Group has performed Alice in Wonderland, which last year celebrated 150 years since the book was first published in 1865.
This production is billed as the traditional story with a modern twist, featuring well-known buildings, locations and references from around Llangollen as well as bush-tucker trials.


Hits from across the decades will provide the sound-track, opening with Do You Love Me from the 1960s, and will be accompanied by a live band.


Alice in Wonderland's co-director, Nico Decourt from Abbey Road, Llangollen, said: “The show features well-known songs and music from every decade since the 1960s including last year's hit Uptown Funk.


“For a 90s theme we're looking to the Manchester band Oasis for inspiration and have renamed the Cheshire Cat in the story of Alice in Wonderland, the Manc cat, as a tribute to the band. The cast and crew are rehearsing very hard to ensure this pantomime is the best ever.”


Alice in Wonderland is the 33rd production by the Llangollen Pantomime Group, which was started by St Collen's Church in 1983.


Entire families regularly participate in the production with parents and grandparents performing or working backstage alongside their children and grandchildren.


For the first time, tickets are available online at https://www.ticketsource.co.uk/llangollenpanto and from Jades Hair & Beauty, Llangollen or Gwyn Davies (Butchers), Llangollen. You can also reserve tickets by calling 01978 860297.
Posted by llanblogger at 7:18 AM