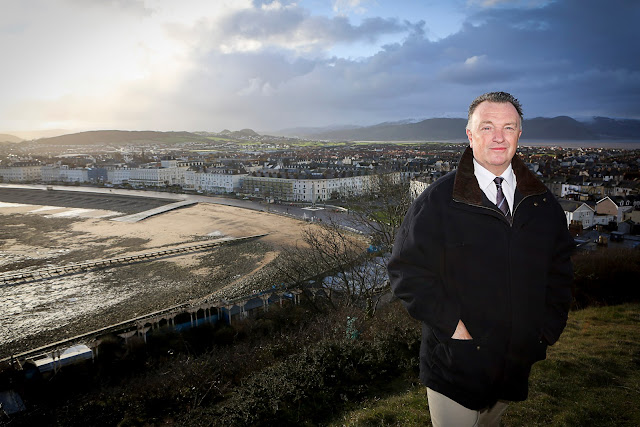 * Jim Jones, with Llandudno in the background, is now managing director of North Wales Tourism.
A Falklands veteran with years of experience with local authorities is on a new mission to sell North Wales to the world.
Jim Jones spent eight years with the Welsh Guards and was badly burnt during the Falklands War.
After leaving the forces he worked in local government - eventually heading up the tourism and communities department at Conwy Council.
Now he has taken the role as managing director of North Wales Tourism, the largest destination management organisation in Wales.
Talking about his career, Jim, 51, originally from Llandudno, said: “From a very young age, when I was a member of the army cadets in Llandudno, I wanted to join the military.
“I was proud to eventually serve for eight years in the Welsh Guards and, amongst other places across the world, I served in the Falklands where I was involved in the war with Argentina in 1982.
“I was one of the Welsh Guardsmen aboard the landing ship Sir Galahad when it was bombed by the Argentines.
“I was quite badly burned.
“After recovering from this injury I continued to serve with the regiment but after being hurt again during a training exercise, I left the army.
“I spent many years working for local authorities.
“I am passionate about caring for the community I live and work in, which led me to working with local authorities.
"I became Head of Strategy, Performance and Projects for the London Borough of Redbridge and after 18 months in that job I came back to North Wales and spent eight years heading up the tourism and communities department at Conwy Council.
“I learned then the tourism adage that ‘if it’s a great place to live then it’s a great place to visit’.”
He said leaving the authority was a tough decision.
“I loved my job with Conwy Council because I love working for the community, so it had to be something pretty special to prise me away from that – and the job I have now,” said Jim.
“As managing director my overall role and aim is to put North Wales firmly on the tourism map, both nationally and internationally.
“North Wales Tourism is a movement of like-minded people in the tourism business who see the benefits of belonging to a regional brand, which is North Wales.
“Ours is an organisation that is not supported by any government money and is run for the benefit of its members.”
He added: “Our membership is currently 1,000-plus, and growing, and members come from all sectors of the tourism trade, including hoteliers, attraction providers and many others.
“Some have been with the organisation for 20-odd years.
“My average day is spent engaging with tourism businesses, putting together marketing packages and generally representing North Wales Tourism to other organisations.
“I like to say that if you give me just five minutes in a room with someone I can sell North Wales to them.
“My mission over the next 12 months is to bring the tourism industry in North Wales together, so we can collectively promote North Wales’s spectacular beauty.
“We have diversity of landscape, heritage, culture and language, quality food and drink, fantastic accommodation, and the huge investment that is being put into our adventure and family attractions.
“These are putting us on the map as one of the best adventure tourism destinations in Europe.
“Another key project is the development of our North Wales Tourism Hospitality Academy.
“This academy will provide solid links between universities and colleges and the industry, to make sure we are equipping employees of the future with the skills they will need to meet the expectations of future visitors.”
The organisation is currently based in the West End of Colwyn Bay but is moving into new offices in the centre of the town to establish a North Wales Tourism HQ.
Jim said: “We have 20 staff but we are looking to increase our membership and expand our presence by opening more drop-in centres across the region.
“That could mean more job opportunities.”
He added: “We are the largest destination management organisation in Wales, we have been going for 25 years and have a membership that is growing. I think that makes us unique.”
Jim also paid tribute to his predecessor at the group.
He said: “Esther Roberts did a tremendous job in the 15 years she was with the organisation.”
Posted by llanblogger at 6:47 AM