Renewed calls for double yellow lines on A5 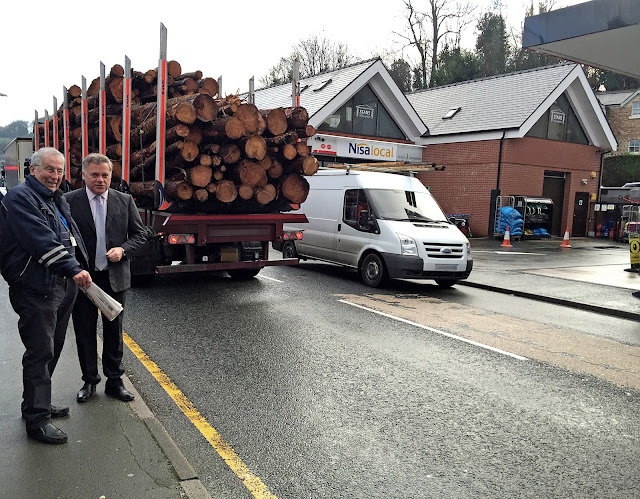 * Cllr Stuart Davies and Simon Baynes on the main
road opposite Stans in Llangollen, pointing to where
they want to see the double yellow lines put down.
Llangollen county councillor Stuart Davies and Simon Baynes, Welsh Conservative Assembly Candidate for Clwyd South, are demanding that the Welsh Government fulfils its promise to implement double yellow lines on the A5 outside Stans in the town.
They say that parked cars are causing traffic hold-ups which make it difficult for customers, particularly the elderly, to cross the road to the supermarket.
They claim the government promised to implement double yellow lines over two years ago but have failed to deliver.
Cllr Davies said: “The failure by the Welsh Labour government to implement double yellow lines is inexcusable.
"There is virtually no cost involved and the benefits would be huge for this part of Llangollen.
"People find it difficult to cross the street to Stans and the traffic congestion caused by parked cars there is really bad."
Simon Baynes said: “There is no justification whatever for the Welsh Labour government’s failure to implement double yellow lines.
"I am really surprised that local Labour politicians have not chased their ministerial colleagues more effectively on this.
"If I am elected as the new Assembly Member for Clwyd South in May I will make this a top priority so that people in Llangollen can cross the A5 more easily and see much less traffic congestion in this part of the town.”
Posted by llanblogger at 7:05 AM