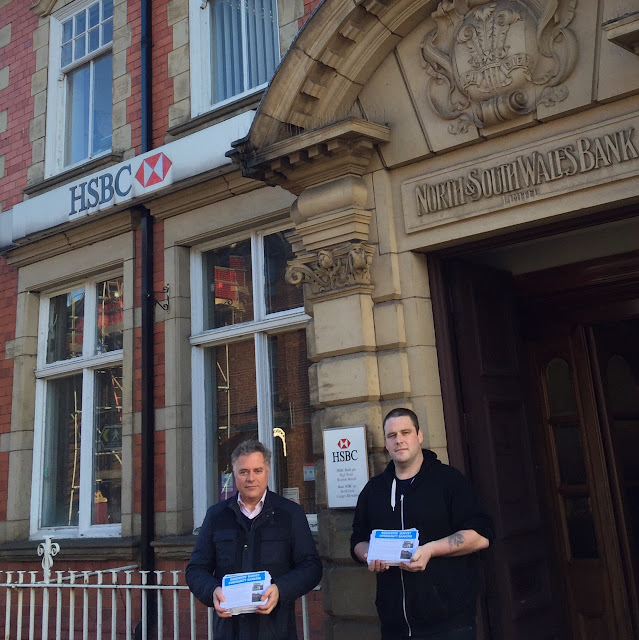 * Simon Baynes, left, with Shaun Roberts at the HSBC branch in Ruabon.
Two public meetings are planned for later this week to discuss the closure of HSBC bank branches in in Chirk and Ruabon - both of which will affect people in Llangollen.
The meetings have been organised by Simon Baynes, the Welsh Conservative Assembly Candidate for Clwyd South.
Last week, following the closure announcement, Mr Baynes and a team of local helpers distributed 1,500 copies of a residents’ survey on community banking in Chirk and Ruabon.
He says demand for the survey from shops, local businesses and residents was very strong and shows the depth of concern in the communities about the closures.
Helped by residents such as Lynne Hughes in Chirk, who has the shop M.G.Hughes Fruit & Veg on Church Street, Mr Baynes has arranged the public meetings, at the Parish Hall, Chirk on Thursday January 14 at 7pm, and at St Mary’s Church and Community Hall in Ruabon on Friday January 15 at 7pm.
Mr Baynes said: "Our residents' survey in Chirk and Ruabon provides an opportunity for the com munity to show how important the banks are to their daily lives.
"There was huge demand for the surveys today and local residents, shops and businesses in both communities are very concerned about the banks’ closures.
"The surveys come with a Freepost envelope for their return to us and we will communicate the results to HSBC. The survey can also be filled in on my website - http://www.simonbaynes.co.uk/campaigns/hsbc-bank-closures
"We are pleased to be working with people locally in both communities in organising these public meetings which will give an opportunity to local residents and businesses to express their worries.
"We are inviting HSBC to both meetings and hope that representatives can be present next week or on a future occasion to hear their customers’ concerns, many of whom have been loyal and longstanding clients of the bank."
Posted by llanblogger at 6:55 AM