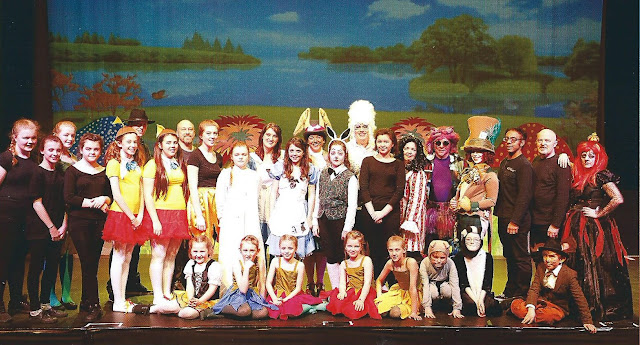 * The cast of Alice in Wonderland lines up.

THE Pavilion stage has been transformed into an all-singing, all-dancing wonderland for Llangollen Pantomime Group’s latest production.


It might have been cold outside, but last night’s crowd were thoroughly warmed by the antics of a large and talented cast ranging from dancing tiny tots to wise-cracking and singing grown-ups.
Alice in Wonderland, of course, follows a dreamy girl of that name through an action-packed odyssey in which she encounters the likes of a time-conscious White Rabbit and the deliciously barmy Mad Hatter and March Hare.


The larger version of Alice is played neatly by Serena Young, who is quite an accomplished singer and actor, and the smaller version (for fitting through small doors etc) by a handy Celyn-Orton Jones.
There’s a nice cameo from Seren Decourt as the eternally late bunny and, in terms of vocal power and sheer zest, Llan panto veteran Jo Potts is outstanding as the Mad Hatter complete with oversized headgear. Tessa Orton-Jones makes a superb March Hare with those big floppy ears and pronounced Welsh accent.


Another real star of the show is Noel the Cat, Alice’s feline guide, gloriously portrayed by Neil Barrett in the style of Manc Oasis star Noel Gallagher and who is constantly “up fer it!”
Every panto needs a villain but in this one there’s two – the Queen of Hearts, a hissingly good and big-voiced Justine Bradey, and the Ace of Spades, a bitingly beastly Nico Decourt.


There ain’t nothing like a dame when it comes to pantos and ours was fortunate to have Simon Orton-Jones filling – and I do mean filling – that role with aplomb.
There are further nice turns from young Eve Barrett and Millie Orton-Jones as, respectively, the comedy double act Tweedle Dum and Tweedle Dee. And Harvey Barrett, who is a handy Dormouse, proves he’s a Llan panto star in the making.


Another audience favourite is Jo Pearson doing a bit of gender bending to play the King of Hearts.
Sets, with their large moving picture backdrop, are brilliant as are the costumes.


Helping to make this production a hit are the well-chosen – and thankfully up-to-date - pop songs and funky dance routines that lavishly intersperse it, all marvellously backed by a great five-piece band.
The whole feel-good experience is a credit to co-directors Justine Bradey and Nico Decourt and producer Simon Orton-Jones.

Alice in Wonderland still has a couple of shows left, so catch it if you can today or tomorrow.

Tickets are available from Jades Beauty, Llangollen or Gwyn Davies (Butchers), Llangollen. You can also reserve tickets by calling 01978 860297.
Posted by llanblogger at 9:44 AM