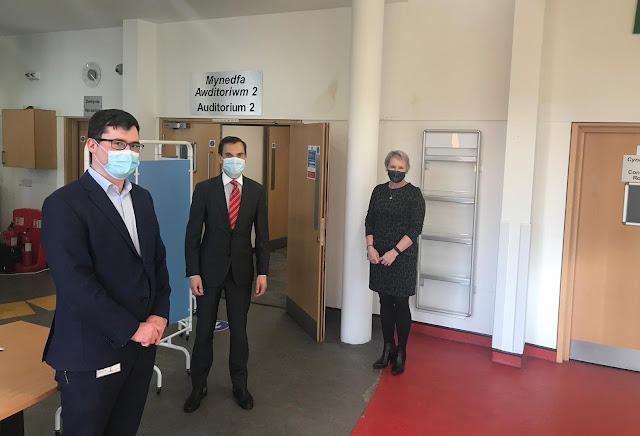 Member of the Senedd Ken Skates praised the “monumental” efforts of NHS staff after a visit to Wrexham’s vaccination centre.

The MS for Clwyd South was invited to join Mark Polin, Chairman of Betsi Cadwaladr University Health Board, at the Catrin Finch Centre at Glyndwr University on Monday (February 15).

The facility opened on January 26 as one of the health board’s Local Vaccination Centres and has already seen thousands of priority patients given their jabs.

Mr Skates said: “The team are doing an incredible job and I’m really grateful to the health board for inviting me to go and see how things are going first-hand. I’ve had a lot of feedback recently from constituents saying how impressed they’ve been with the organisation and efficiency at the Mass Vaccination Centre in Deeside and here in Wrexham, and it’s clear to see why.”

The centre has been open six days a week as the roll-out programme across North Wales continues to accelerate, and Plas Madoc Leisure Centre has also been lined up as a second LVC in Wrexham.

Mr Skates’ visit followed the news that Wales had become the first UK nation to reach the milestone of offering jabs to everyone in the first four priority groups.

He said: “It really has been a monumental effort by everyone involved and it’s something we can all be immensely proud of. Betsi Cadwaladr was the first health board in Wales to hit 100,000 and it’s fantastic to see the roll-out up here going from strength to strength. They deserve huge credit.”

Mr Skates added: “We hit our first milestone ahead of schedule, but no one is resting on their laurels. The next phase is already under way and the health board has begun offering appointments to people in priority groups five and six as well as arranging second dose appointments to all those in the first four groups.”

The next phase of the roll-out will see vaccinations offered to people aged 65-69; people aged 16 to 64 with an underlying health condition; younger adults in residential care settings and unpaid carers who are looking after vulnerable people.

Mr Skates added: “Arrangements are in place to make sure no one is left behind. If someone missed an appointment because they were ill, or they changed their mind about having the vaccine, a new appointment will be made for them."

Posted by llanblogger at 7:00 AM