Campaigner gives update on response to his recycling petition 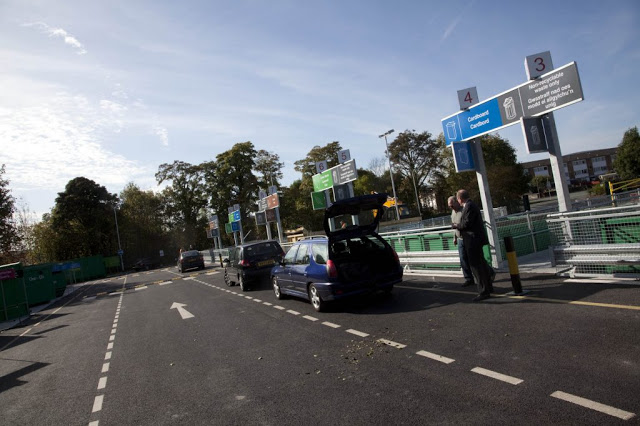 The Llangollen resident who sent in a petition to Denbighshire County Council (DCC) calling for a full-time recycling site to service the area has given an update on responses to it from key officials.

In six weeks Phil Jones secured 800 on-paper signatures for his petition with more being added to an online version.

It asks the county to negotiate with neighbouring Wrexham County Borough Council for Llangollen people to have guaranteed access to the Plas Madoc Recycling Centre.

At the time the submitted the list of names he said "I think this is a measure of the frustration and anger felt by the community that daily access to a recycling facility requires a 30-mile round trip to Ruthin, when we have one on our doorstep at Plas Madoc."

In an update to his campaign he says: "I have now received a response from the Lead Member in Denbighshire County Council responsible for waste, and also from our two County Councillors, Messrs Timms and Mile. I received a detailed response summarised in the following extracts:

1] There are currently no plans to look for an alternative site to provide a new Household Waste Recycling Centre((HWRC) in the Dee Valley,

2] There is an acknowledgement that DCC did enter into discussions with WCBC after the closure of our site at Wenffrwd, that no agreement was concluded, but 'It is likely, however, that some Denbighshire residents did use the Plas Madoc site'

3]  DCC has ... 'now received a further response from Wrexham, which is the start of a more detailed discussion to agree the details of any potential proposal ... we will continue to keep the dialogue going with Wrexham to progress the matter as soon as we possibly can.

4] 'We remain committed to exploring whether it is possible and affordable to enable Dee Valley residents to use the Plas Madoc site, and we will push to get these discussions concluded as soon as possible.

5] 'The council does not feel that there is a valid case to provide a free bulky collection service for residents in the LL20.'

6] I have also been assured by our County Councillors that they are pressing for an early conclusion to the discussions with Wrexham CBC.

I was informed some time ago by an officer in WCBC that no resolution was likely to be achieved before April. It is true that the pace of negotiations will be governed by WCBC, but reaching a provisional agreement on a costed service level agreement between the two council’s isn’t the end of the process because funding and committee approval has to be secured before an agreement could be implemented.

With cash limited budgets the Council may wish to close services to pay for the new service. The obvious candidate might be the pop-up service at the Pavilion. Our County Councillors may wish to consult the community on any proposals for change to the service before a final decision is made. I have argued that as over 900 people have now signed our petition asking for access to Plas Madoc the express wishes of the town could not be clearer, and that consultation would add yet more delay.

If you feel that consultation is an important and necessary step which should be taken before the potential loss of the pop-up service at the Pavilion, please email me at llanrecycle2021@gmail.com

Thank-you to all who have supported our campaign."