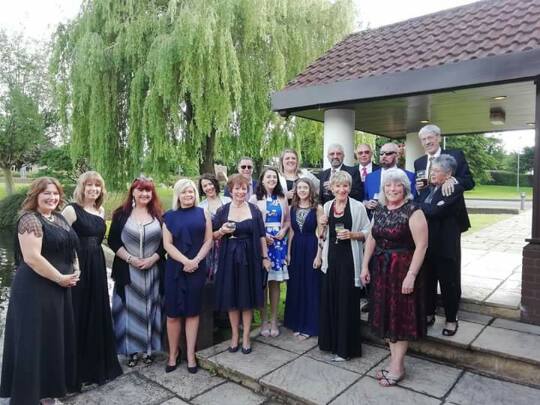 * The Llangollen Operatic team at the presentation evening in Hereford.

Llangollen Operatic Society came away with two wins plus a sheaf of nominations from this year’s amateur stage “Oscars”.

At the annual NODA  - National Operatic and Dramatic Association- Awards presentation evening in Hereford last Saturday the society’s junior section, the Young ‘Uns, had been nominated for Best Production of 2018 with Joseph and the Amazing Technicolour Dreamcoat while young actor Shea Ferron received a nod for Best Supporting Youth Performer Under-21 for his part as the Pharaoh in the same show.

Llangollen won both these categories.

In the society’s adult section Bill Hughes was nominated for Best Individual Performance Musical Theatre for his portrayal of Alfred Doolittle in the production of My Fair Lady in 2018.

As a show, My Fair Lady had been nominated for Best Musical Theatre Production in NODA’s District 1a 2018 and also Best Stage Management and Technical.

Jo Lloyd was the show’s director while Helen Belton produced with Leigh Mason as musical director.
Posted by llanblogger at 9:42 AM