Kia with a 170mph sting in the tail 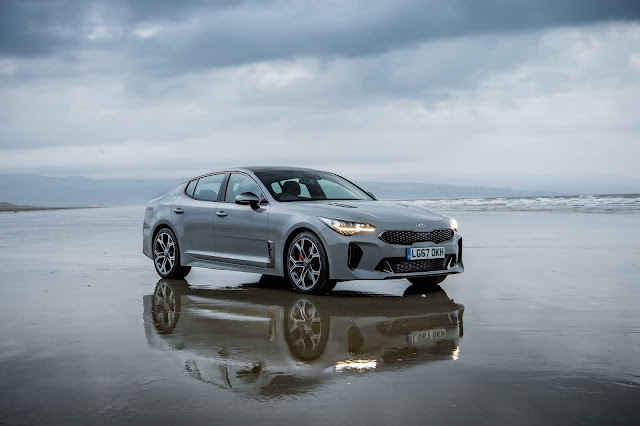 A Kia capable of 170mph. We are having a laugh aren't we?

Nope, the Korean company that has won over the Brits with hatchbacks and crossovers has moved into the fast lane with a sports saloon destined to challenge the sporting hierarchy that is BMW, Audi, Mercedes-Benz and Jaguar.

Enter the Stinger - what a great name for a grand tourer - the quickest and boldest car ever to come off a Kia production line. New territory it may be but Stinger is no flash in the pan attempt to take on the establishment.

Stinger has been six years in the making and Kia waited until they had the right people in place before finally going for it. The final act was poaching Albert Biermann from BMWs M Sport division to make sure Stinger's engine and chassis were on the money.

The result is pure eye candy. People stand and stare and can't quite take in that this beauty is a Kia and who can blame them when the staple so far has been Ceed hatchback and Sportage crossover.

As a package Stinger is out there on its own stacked with kit making it serious value for money. Most of the standard features would be options on its German rivals. And while the German trio still feel a bit more special Stinger's cabin is a cut above anything we have seen before from Kia.

That's all very well but the real key to Stinger's success will be down to performance and handling. Biermann's task was to engineer a rear wheel drive grand tourer that was sharp and quick but not so brutal that you finished your journey thinking you had just climbed out of a rally car.

To that end he has succeeded. Stinger is as sound as a pound when pushed hard with quick steering and strong dynamics yet the level of comfort is rather better than might be expected. There are the usual electronic settings for different ride modes and even one that tailors everything to the driver's needs. I tried that but couldn't feel any difference.

The ultimate Stinger is powered by a 3.3 litre V6 with two other engine options, a 2-litre diesel or 2-litre petrol which is the subject of this road test. Logic would tell you to go the whole hog and buy the V6 rather than settle for second best yet I was more than satisfied with 'second best'.

The direct injection petrol musters 230bhp and responds more than adequately when asked put to the task through an eight speed automatic box with shifter paddles. Throttle response is swift accelerating Stinger to sixty in around seven seconds and there is enough mid range punch to set the adrenalin flowing.

Where Stinger leaves its rivals standing is on specification. It wants for nothing with a full suite of safety features which are important elements these days, and all the luxury items we crave. So if your wish list includes heated steering wheel, heated and ventilated front seats, heated outer rear seats, sharp 360 degree view monitor, head up display, auto dipping headlights along with navigation and voice control then look no further.

I could only find one minor irritation. The centre mounted touch screen is a bit of a stretch for the driver and would be far better if selections could be made with a rotary controller in the centre console.

Whichever way you look at it Stinger is a wild card entry into the world of sports saloons, here to challenge the sporting hierarchy that is BMW, Audi, Mercedes and Jaguar. For a first effort it is a resounding success - BMW would have been over the moon if its first M5 was this good, yet Kia's UK sales hopes are modest at around 1,800 a year.

Badge snobbery counts for a lot when it comes to speed machines so expecting Audi, Merc or BMW loving Brits to swap in their droves isn't going to happen - yet. But happen it will because Stinger can will make it to the premier division, it just needs a bit more time.