Eisteddfod team learns how to use lifesaving machine 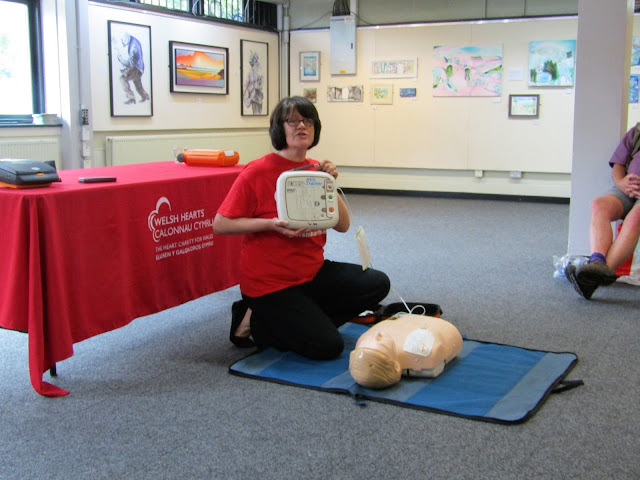 * Jo Davies of Welsh Hearts demonstrates the use of a defibrillator. 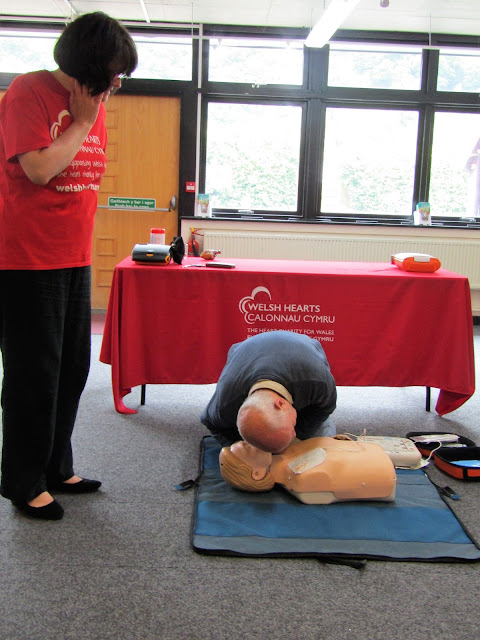 A person suffering a cardiac arrest has a 70% chance of survival if a defibrillator is used on them in the first few minutes after being struck down.

That was the message to a group of volunteers and staff at Llangollen International Eisteddfod as they received their training in the use of this vital piece of lifesaving equipment, an example of which is now available for the use at their Pavilion headquarters.

The defibrillator, housed in bright yellow casing and fixed to the front wall of the building, was recently donated to the eisteddfod by the charity Welsh Hearts.

And on Friday morning around 20 members of the eisteddfod team received expert instruction in its effective use from Welsh Hearts representative Jo Davies, a retired cardiac nurse.

She told them that someone hit by cardiac arrest - where the heart stops pumping blood around the body - has a 70% chance to staying alive if a defibrillator is used on them within four or five minutes.

Ms Davies also explained she had two other messages for someone using one of the electrically-powered and computerised machines for the first time - the huge shock they emit to re-start the heart cannot possibly make a patient any worse off than they are already and a it will not allow somone to be shocked unless they are desperately in need of it.

She went on to demonstrate on a dummy known as Donald the exact process of putting a defibrillator swiftly into action and also the correct way to perform CPR -  cardiopulmonary resuscitation (CPR) the manual application of chest compressions and ventilations - which should also be used alongside it.

Eisteddfod chairman Dr Rhys Davies, who was at the training session, said: “We are extremely grateful that Welsh Hearts donated the defibrillator to the festival which welcomes thousands of visitors and competitors each year from across the world.

“I would also like to thank the charity for staging this very instructive training session because as a doctor I realise how important it is for as many people as possible to be aware of how to use this fantastically useful piece of equipment.”
Posted by llanblogger at 6:39 AM