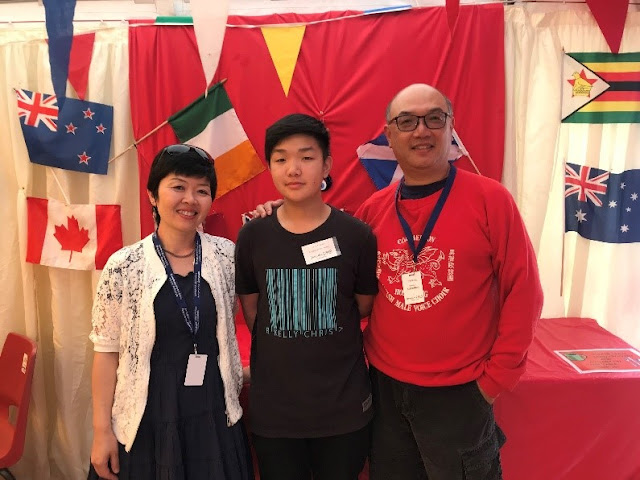 * Bill Kong, right, with his wife Selena and their son Daniel.

A businessman from Hong Kong is making his magnificent seventh trip to Llangollen International Eisteddfod to work as a volunteer.

And this time Bill Kong will be bringing with him the male voice choir he has been a member for many years and which will mark its 40th anniversary by performing at the festival.

Wine expert Bill, 58, recalls being mesmerised by the intoxicating magic of the eisteddfod on his first visit as an audience member in 2013.

He was so taken with the atmosphere that he was determined to travel back to Llangollen to join the small army of dedicated volunteers who help make the iconic cultural event such a big hit and has been coming back ever since.

Bill’s links with Britain go back over 40 years to when he attended a prep school near Bewdley in Worcestershire then a public school near Uttoxeter in Staffordshire.

Later he went on to Manchester College, Oxford to study for a degree in social administration before returning to Hong Kong in 1984.

Bill joined the Hong Kong Welsh Male Voice Choir - HKWMVC - there a couple of years later after being introduced to it by a friend.

He performed with the choir in the London Welsh Festival of Male Voice Choirs at the Royal Albert Hall in 2004 at the invitation of the London Welsh and sang with it in the chorus of the Hong Kong Art Festival’s production of Tosca in in 1999, which is where he met his wife Selena.

When he’s not drinking in the joys of music Bill works as a consultant in the wine business in Hong Kong and has been a wine importer, educator, consultant to importers and a wine judge.

Bill said: “Selena and myself, along with our son Daniel who is now 14, will be arriving in Llangollen from Hong Kong once again.

“Apart from volunteering to welcome visitors from across the world, this year we will help as the field hosts to my own choir.

“Our HKWMVC will be bringing 36 choristers to take part in seven performances at the eisteddfod and three outside performances including Bala, Gresford and Wrexham.

“This year also happens to be HKWMVC’s 40th anniversary year and beside our multinational choristers we will be joined by our better halves, families and friends from Hong Kong.

“We will have close to 100 people attending this year’s eisteddfod and most will be in Llangollen, and at the eisteddfod, for the first time.

“Amongst our party will be a number of our choir’s founding members and our life president, Berwyn Evans.”

Bill added: “I am truly honoured to have been an ambassador for Hong Kong to the eisteddfod.

“I can’t believe this is my seventh year here with my family and we feel Llangollen is our second home.

“I must thank everyone at the eisteddfod and in the town of Llangollen for having given my family a most wonderful experience and the kind of hospitality that we can never forget.

“I’m looking forward to seeing everyone on the field.”
Posted by llanblogger at 7:15 AM