Latest from canal man Phil as he heads for Llan 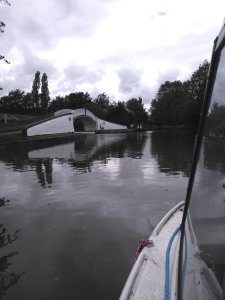 * The view of the canal from Seren's cockpit.

A former local town councillor is now well into his three-week canal boat trip to reach Llangollen in time for next month’s International Eisteddfod.

Phil Thane moved down to Potton in Bedfordshire just over two years ago and has since rebuilt an elderly boat named Seren.

Phil, who is a technical author by trade, is writing a blog on the voyage through the canal system for the Waterways World magazine - and he’s also going to keep llanblogger readers up to date on his progress, which involves 316 miles and 232 locks - each way.

Bright and sunny this morning, though it soon turned grey. Having dried out the inverter it works again and the fridge is on, which will be useful if ever the weather turns warm.

I’ve tried to shield it from future downpours but in the long term I should re-site it, probably in the engine compartment.

Three lots of locks today, and thankfully got help with all of them, I made an early start on Buckby locks, but after the first two came to a halt as CRT had padlocked them to save water. I guess the policy precedes the recent weather, there was so much water some locks were overflowing. We had to wait until 10.00 and a queue built up. That’s the idea of course, when there are boats waiting they double up and the lock is used less often.

After Buckby locks I passed through Braunston tunnel. It’s about a mile long and quite spacious (the Grand Union was widened in the 1930s) I followed a boat through but none came the other way so we didn’t have to test that the tunnel really is wide enough for boats to pass.

After that, Braunston Locks then a long lock-free stretch to Calcutt locks. About an hour from Calcutt we had a thunderstorm, heavy rain and hail and strong wind. I avoided most of it by edging up to the bank and letting the wind pin Seren there, I wasn’t going to get out and moor!

I was thinking of stopping above Calcutt Locks but as I approached I cought up with a guy in an old narrowboat who was planning to go through, so we went together. The locks have big paddles operated by ‘modern’, ie 1930s, hydraulic gear so they fill and empty quickly. We made short work of the three then I cruised on to Stockton, stopping near Stockton top lock.

* You can follow Phil on his blog at: https://pthane.co.uk/blog
Posted by llanblogger at 11:11 AM