Gin from solar distillery on show at Llangollen Food Festival 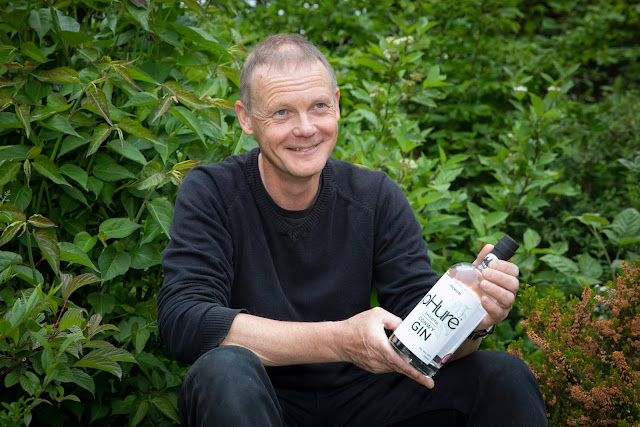 * Kevin Flower with his new gin.

A scientist is on a mission to create the perfect gin after setting up his new solar-powered distillery in time for a top food festival this autumn.

Former university lecturer Kevin Flower will be unveiling the special edition gin at the popular Llangollen Food Festival on Saturday and Sunday, October 19 and 20.

Kevin, 53, who taught chemistry at the University of Manchester, has developed an eco-friendly distillery in the garage at his home in Conwy.

Three years ago he threw caution to the wind, alongside university pals Andy Whiting and Euan Noble, to develop a unique brand of gin based on decades of combined scientific expertise.

Their company, PHure Liquors, continues to go from strength to strength with a growing list of stockists including pubs, delicatessens and off licences across North Wales.

It will be their second visit to the Llangollen Food Festival which has been named as one of the Top 10 food festivals in the UK.

This time they will be launching the new Autumn gin flavoured with seasonal fruits and berries.

“We came to Llangollen for the first time last year and it seems like the perfect place to celebrate our “50th batch” with a special edition gin using our new solar energy distillery,” explained Kevin who formerly worked as a university research fellow in Auckland, New Zealand.

“The recent addition of solar power has been really important, enabling us to generate more electricity than we need during the distillation process. In this way, we make a small contribution to reducing our carbon footprint.

“You only have to look at what’s going on in the news and the impact human activities are having on the environment to realise every little helps. Everything we make now uses green energy generated by ourselves.”

Solar power is not the only environmentally-friendly benefit from Kevin’s method of making gin.

“We also distil at a lower temperature and lower pressure than other commercial producers,” he said.

“By reducing the pressure, you reduce the temperature at which the liquid boils which is the reason why water boils at 71 degrees on the top of Everest.

“Our distillation temperature is around 35 degrees lower than in a normal copper still distillation so uses less energy. The pressure we distil at is equivalent to about 46,000 feet up.

“As custodians of the planet we have a duty of care. If you can reuse and recycle everything then we create as little rubbish as possible.”

Kevin, who is originally from Sussex and completed his degree and masters in chemistry at Bangor University, was teaching at a local college when he decided it was time for something different.

“Like many in the teaching profession, I’d had enough,” he said.

“It wasn’t the teaching it was everything that goes with it, so I was looking for other outlets.”
The scientists set themselves a friendly challenge to create a unique gin based on their knowledge of science.

“We took the classic academic approach, looking at various scientific literatures about distillation processes and we used that as a basis for how we were going to start, basically turning it into a scientific experiment,” explained Kevin, who has also lectured at the University of Sussex and the University of Manchester Institute of Science and Technology (UMIST).

“It’s called “combinational” strategy,” explained Kevin, who divides his time between his business and private tutoring.

“In a sense, instead of deciding to put this much with that and doing it in a linear fashion you do it in a parallel fashion. We produced each of the botanicals individually. We then took out a fixed volume of each botanical and varied how much we added. We did the same with the second botanical and so on.

“We discovered that just by varying the amount you can achieve a very wide flavour range in a short space of time. It enables you to discover flavours very quickly or eliminate them far more easily, instead of throwing them all in at once and not liking what you find.

“The strategy, although new to gin making, has been around for donkeys’ years and is the way they search for active leads in chemistry.”

The result was the creation of its flagship pHure Gin, made from 96% organic wheat grain alcohol. It remains the company’s biggest selling gin thanks to its velvety smooth flavour and is the base for all its other gin products.

“One of my business partners runs a pub in Yorkshire and for nearly a year we trialled a small amount to see whether we could sell it,” said Kevin.

“Once we worked out people were buying it and coming back for more it was worth expanding and making more of it.”

The company produces occasional batches of Honey Gin and most recently launched strawberry and rhubarb flavours.

Euan, who lives in Yorkshire, is commercial director and looks after compliance/licensing issues while Andy, from Durham, is technical director and delivers presentations on gin production.

“Sales are growing year on year. As we do more and go out more to food festivals we get more people interested in buying it,” explained Kevin, who is production director.
He’s looking forward to returning to the festival which has played a part in building the company’s reputation.

“It’s basically good advertising and gives you the opportunity to go out and meet people who could become potential customers. Last year, we acquired a new delicatessen from just being at the festival. They’re really a great marketing and advertising exercise.”

He said: “A major part of our role is enable our growing army of indigenous food and drink producers to have a higher profile by providing them with a shop window.

“I am looking forward to sampling the new, solar-powered gin at the festival and I wish them every success.

“Their eco-friendly approach is right on trend and I’m sure the taste will also hit the spot.”
For more information about Llangollen Food Festival go to www.llangollenfoodfestival.com

Posted by llanblogger at 8:03 AM