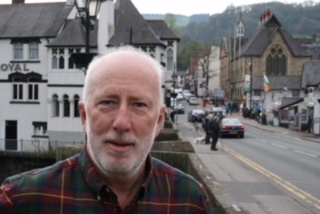 * Llangollen county councillor Graham Timms
is amongst the signatories to the climate change motion.

Llangollen's Graham Timms is amongst a group of county councillors calling on Denbighshire to declare a climate and ecological emergency.

He said: "I was approached by Llangollen Friends of the Earth to see if I would be prepared to put a motion calling for a climate and ecological emergency to DCC and agreed.

"However, I did not want the motion to appear to be a Labour Party motion as I thought that it would gain much more support if it was sponsored by individuals from other groups too.

"This issue is far too serious to be claimed by one political party. I sent FoE names from all political parties who I thought might be sympathetic to the motion and as a result it has been put forward for the council meeting next Tuesday with three names, Joe Welch, the independent councillor for Llanrhaeadr-yng-Nghinmeirch, Mabon ap Gwynfor from Llandrillo and myself."

He added: "The scientific community tells us that unless we move very quickly to reduce our carbon dioxide emissions there will be catastrophic consequences, causing climate change and an ecological disaster for the whole earth.

"Whilst this issue needs to be tackled internationally by governments across the world, I believe that we should set an example locally by committing ourselves to becoming carbon neutral in the next 10 years within Denbighshire County Council.

"Llangollen recently became the first town in Denbighshire to gain 'plastic free' status from Surfers against Sewage, showing that our residents and businesses already have a commitment to the environment.

"If this motion is passed it will extend our commitment to the whole of the county council. We are proposing the setting up of a task and finish group to examine the extent of the work that needs to be done to achieve our aim. It will report back to the council within 6 months with a plan on how we can become carbon neutral by 2030 at the latest.

"I've had lots of emails from concerned Llangollen residents urging me to press DCC to declare a climate emergency.

"As a former science teacher I have been teaching young people about the dangers of carbon dioxide emissions and the greenhouse effect. I recently met with the school council at Ysgol Dinas Bran and they were also passionate about the need to take action locally to prevent serious environmental damage. It is time now that we take this issue very seriously and look carefully at how we can all work together to avoid the crisis that scientists predict."

The motion calls for Denbighshire County Council to:

● Set up a task and finish group to draw up a clear plan within 6 months to achieve the above, including ways to enhance biodiversity in Denbighshire

● Call on the Welsh Government and UK Government to provide assistance and resources to enable us to reduce greenhouse gas emissions and enhance biodiversity.

● Work with partners across the public, private and third sector to help solve this climate and ecological emergency.

The Welsh Labour Government declared a Climate Emergency earlier this month, setting a date of 2030 when they would aim to become carbon neutral in the public sector. https://www.bbc.co.uk/news/uk-wales-politics-48093720
Posted by llanblogger at 7:33 AM