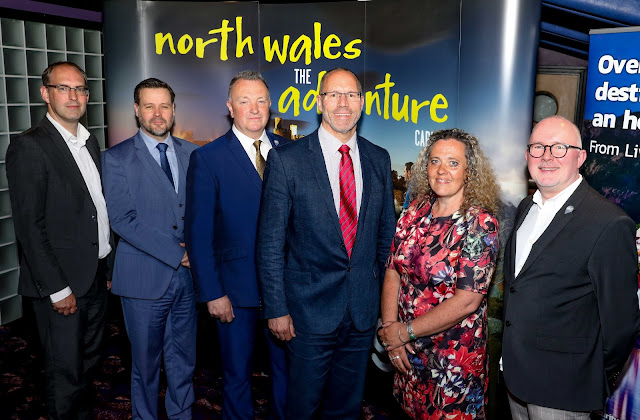 * The launch of the new online map introducing visitors to North Wales.

The UK’s first online video map to promote tourism has been launched to help attract more visitors to North Wales.

The new map was unveiled at the annual meeting of North Wales Tourism and includes around 40 films from attractions, events and accommodation providers across the region.

According to managing director Jim Jones, they were now looking for more high end promotional videos to populate the map which can be accessed via the organisation’s website, www.gonorthwales.co.uk

The map can be used with North Wales Tourism’s new online itinerary planner which is also on the website.

Mr Jones told the meeting that the spectacular growth in the tourism industry in recent years was being driven by adrenaline-fuelled tourism.

That had been the spur to launch a new umbrella campaign, branding North Wales as the European Capital of Adventure.

Overall, the visitor economy is now worth £3.1 billion a year and employs 40,000 people.

He said: “We thought it would be a really good idea to launch the new video map as an excellent tool for visitors, showcasing North Wales through video.

“All the videos featured are from our members and they are a really good way to see what they can expect when they arrive at a destination.

“We’ve had a soft launch to make sure all the technology is working but we have the capacity for a lot more and that’s what we’re working on at the moment.

“I’m not aware of anything else like it in the UK and the same goes for our itinerary planner which is an incredible piece of software.

“Visitors can go to our website and can formulate plans using the information about the accommodation, attractions and activities.

“They can factor in their journey time, plan their dwell time and it can be printed out or sent via email in a nice, easy-to-read format.

“Essentially, we have put in a lot of work to make life easier for visitors and provide added benefits to our members.”

The aim,  he said, was to capitalise on the huge investment that’s going into North Wales at the moment.

Mr Jones added: “Tourism is booming and it’s one of the biggest sectors in the region’s economy and as a business North Wales Tourism has seen a five per cent year-on-year growth.

“We are riding high and there is a lot of confidence in the industry too.

“There is massive potential for growth and the North Wales Growth Bid is going to have a huge part to play in that because hopefully they are going to create the infrastructure and the environment in order for everybody to benefit.”

Among the guest speakers was John Irving, the chief executive of Liverpool John Lennon Airport, who said that North Wales was an important catchment for them.

He said: “We want to play a role as a gateway for the north west of England but also for the North of Wales.

“We’re at five million passengers now so we think in the next five years we can reach six million just growing the route network and getting some different carriers into the airport.

“There’s about 35,000 inbound passengers coming to North Wales at the moment through Liverpool and there’ll be many more coming through Manchester and via the rest of the UK.”

Lee Robinson, Transport for Wales’s development director for North Wales, told the meeting that on the ground there was an £800m investment to replace every train by 2023 in Wales and that 95 per cent of rail journeys will be made on brand new trains.

North Wales Tourism chair Christopher Frost, who runs the Manorhaus boutique hotels in Ruthin and Llangollen, said: “We’ve had a fantastic 10 years or so with an increase in inbound tourism and outbound tourism and fantastic engagement with overseas markets also.

“North Wales Tourism has been instrumental in creating alliances and creating partnerships with both public and private sector organisations to promote tourism to our members across the whole world.

“Adventure tourism is very important and has seen massive financial input in the North Wales economy, which has impacted across the whole of North Wales.

“I operate in Ruthin and Llangollen and even the events and attractions in Snowdonia impact my business because people come and stay with me and drive an hour into Snowdonia to the Zip Wire or to do the surfing or that kind of thing.

“One consequence is that we are now attracting younger people to North Wales.

“We can offer the best of both worlds. As well as the new adventure attractions, we still have the coast, the castle and the culture for those wanting a gentler time.

“We’ve added a new dimension to something that was already brilliant.”

Posted by llanblogger at 7:42 AM