Twenty Club next presents The Entertainer

The Twenty Club has announced that its spring production will be state-of-the nation classic, The Entertainer.

Written in 1957 by playwright John Osborne, the story of struggling music hall comedian Archie Rice is acknowledged as one of the best-written plays of the last century.

Its enduring appeal was highlighted recently by the success of a West End production featuring Kenneth Branagh in the iconic role originally made famous on screen by Laurence Olivier (pictured). 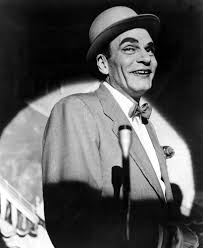 Despite its age the play remains remarkably relevant with its examination, through the use of a dysfunctional family and the background of the Suez Crisis, of the state of the British nation.

The Twenty Club production is being directed by Barry Cook who made his directorial debut with Love on the Dole, and features David Edgar in the challenging role of Archie Rice.

The Llangollen group, founded in 1947, will be hoping to repeat the success of their previous production, The Vicar of Dibley, which played to full-houses and standing ovations on each of its four performances.

The Entertainer tells the story of Archie Rice’s family at a time of collective and personal crisis.

Archie’s father, a successful music hall comedian from the 1930s, despairs at what is happening to this form of popular entertainment.

His son, Archie, beset by money problems, struggles to invest in yet another doomed show and has turned to the device of using motionless nude female performers in an attempt to boost audiences.

One son, Frank, has refused to do National Service and has spent time in prison because of this. Another has enlisted in the army and is currently fighting in Egypt. His daughter, Jean, has returned unexpectedly from her work in London with news of a broken engagement.

The play is imaginatively staged, with Archie’s performances to diminishing audiences interconnecting with his personal and domestic worries.

With a simple but stylish set, the play features songs specially written for the production.

The Entertainer will be performed at Llangollen Town Hall on Thursday March 30, Friday March 31 and Saturday April 1. Doors will open at 7pm with curtain-up at 7.30pm.

Tickets will be available at the door, if spaces are available on any of the three nights, but anyone wishing to attend is advised to book in advance.

An evening out with the Twenty Club also includes a grand raffle, refreshments on sale and the services of a wine bar.

They are also available online.