TEN organisers and supporters of the Llangollen Motorcycle Festival - LlanBikeFest - have just returned from a 1,000-mile trail bike tour of North Vietnam.

The team (pictured below)  helped some of the country’s poorest schools with donations of cash, footballs, pens, pencils and sweets. 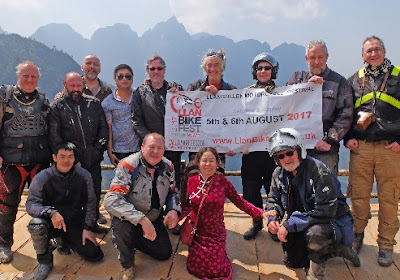 The boarding primary schools are in remote mountain areas, providing much-needed education for some of Vietnam’s 64 ethnic minorities.
Conwy councillor and LlanBikeFest exhibitor Andrew Wood, who owns Triumph and Ducati dealership Woods Motorcycles in Abergele, said: “Visiting the schools was one of the highlights of an amazing trip. Vietnam may be poor but the government is doing everything it can to bring education to everyone, with very limited resources. We were glad to do what we could to help.”


LlanBikeFest co-organiser John Hutchinson said: “The kids and their teachers were brilliant and incredibly grateful for our support. We take so much for granted in the West, so it was quite moving to witness how delighted they were with our gifts and donations.”


The 10-strong team of friends, including seven from North Wales, two from England and a Canadian, spent two weeks riding mainly dirt roads in the Vietnamese mountains bordering China, crossing bamboo bridges and fording rivers along the way.


Now they are back preparing for the Llangollen Motorcycle Festival, which is at the town’s Pavilion on Saturday August 5th and Sunday August 6th.

On-site attractions will include hundreds of bikes, displays, stunts, demonstrations, trade and club stands, plus beer, bands and evening entertainment in Llangollen Town. There will also be a charity raffle in aid of Wales Air Ambulance.


Day tickets are £10 on the gate or online at www.llanbikefest.co.uk with children 15 and under free, or contact the Festival office at 07960 693398, office@llanbikefest.co.uk. Club stands and exhibitor bookings are free.
Posted by llanblogger at 7:37 AM