Railway steams back in time to Victorian days

Llangollen Railway will be stepping back in time to the Victorian era over the weekend of May 13 and 14.

Visitors can experience life as it was over 100 years ago, with the sights, sounds, smells and tastes of the recreated era. 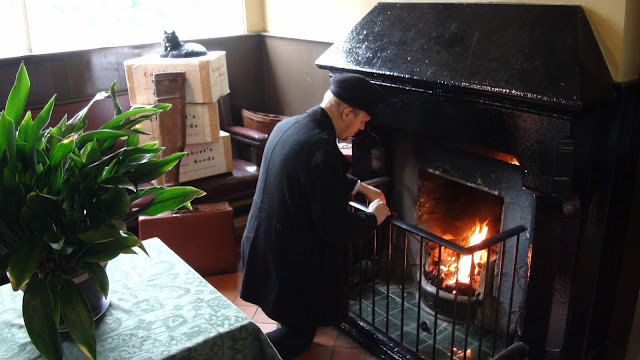 * Lighting the fire at Berwyn Station.


Victorian characters will give you a fascinating insight into different aspects of life back then on and off the rails. They can:

Whilst it is not essential, the railway invites visitors to enter into the spirit of the occasion by wearing suitable Victorian attire.

For intrepid Victorian explorers, walking down the ramp to Llangollen station marks the start of the time-travelling adventure.

The lengthy station platforms recall the times when heavily packed excursion trains arrived at Llangollen from all over Britain from the mid-1860s right the way through until the mid-1960s.

In the Henry Robertson Suite, visitors can explore original documents and artefacts charting the construction of our railway back in the 1860s.

They can also step behind the scenes on a guided tour of the railway's workshops and see how steam locomotives are repaired and maintained.

In the Station Café & Bar there will be a range of hot and cold meals, with all products being freshly baked on the premises.

For the next stage of the trip back in time, you can climb on board one of our historic steam-hauled passenger trains for the 20-mile round trip.

Berwyn station, known as the 'Station in the Gorge', has been transformed back to how it would have appeared in 1897.

Break your journey here and discover what life was like for a Victorian stationmaster.

School parties and groups can download a detailed education pack.

Working in partnership with the Llangollen Railway, the New Dot Cinema volunteers in Llangollen are screening a series of railway films on the Friday before the Victorian Weekend. These will be:
The venue will be upstairs at Llangollen Town Hall in Castle Street, with the doors opening at 7.30pm. The show starts at 8pm with licenced bar and refreshments available. Tickets will be available online a month in advance and also, on the door.