Members of Denbighshire’s Communities Scrutiny Committee have agreed not to proceed with efforts to ban drones over public spaces in Denbighshire.

A report discussed by councillors at County Hall, Ruthin today (Thursday)  followed a Notice of Motion that called for a report to be provided on the regulatory framework relating to drones and the powers, if any, for the council to introduce further restrictions. 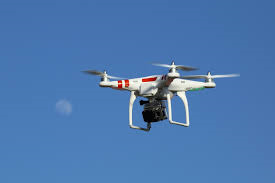 However, the committee agreed that introducing a ban would be unenforceable and that national legislation already in place to regulate the use of drones was adequate. It was agreed that no further action was needed from the council.

The Government has recently been consulting on the legislation around the use of drones. As a result, the council will be keeping a ‘watching brief’ on the outcome of that consultation.
Posted by llanblogger at 1:58 PM