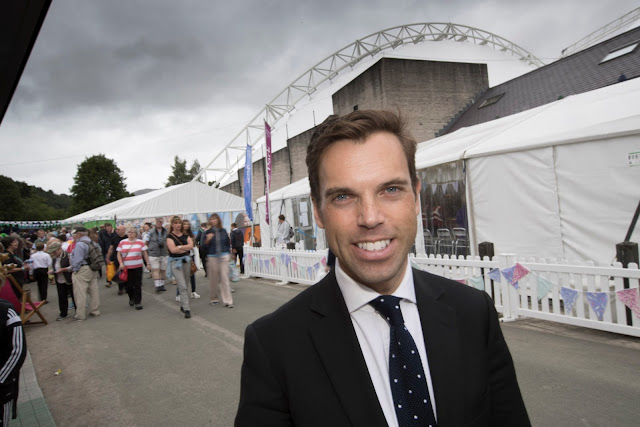 * Ken Skates, Cabinet Secretary for Economy and Infrastructure, at the Eisteddfod.

DESPITE Britain’s exit from Europe, Wales is a still a welcoming and internationalist country.
That was the message from the Welsh Government’s new Cabinet Secretary for Economy and Infrastructure, Ken Skates AM, when he visited the 70th Llangollen International Musical Eisteddfod yesterday (Thursday).
Mr Skates, who represents the Clwyd South constituency in which the Eisteddfod is based, is a long-time visitor to the festival and serves as one of its Vice Presidents.
After around two years as Wales’s Deputy Minister for Culture, Tourism and Sport, he took on his new much wider ministerial responsibilities following the recent Welsh Assembly elections.
After touring the Eisteddfod site, he said: “As someone who is from the area, I’ve been a regular visitor to the Eisteddfod at Llangollen for so many years I can hardly remember how long but it’s got to be at least 20.
“In terms of my new portfolio the Eisteddfod has clear economic benefits for the region and especially the Dee Valley as well as significant cultural benefits.
“This year’s festival is particularly important given the need for us to convey the clear message that, in spite of Brexit, Wales is still a welcoming and truly internationalist country.”
Talking about his latest Eisteddfod visit, he added: “After walking around the field I’ve been impressed with the subtle changes which have been made and considerably improved the visitor experience.
“For example, I have noted the repositioning of certain marquees and better branding, which all contribute to the overall vibrancy of the Eisteddfod field.
“It’s a pleasure to be here again.”
Mr Skates then praised the quality of this years’ festival programme, which has included hugely successful evening concert appearances by opera stars Bryn Terfel, Noah Stewart and Kate Aldrich, along with popular music headliners Jules Holland and Collabro plus a host of world-class music and cultural competitions.
He said: “This year’s line-up of performers and competitors is second to none.”
Eisteddfod Chairman Rhys Davies said: “It’s always a pleasure to have Ken Skates here at Llangollen.
“He has always been a staunch supporter of the festival and of our aims to be  a truly international event where Wales welcomes the world.”
Posted by llanblogger at 3:46 PM