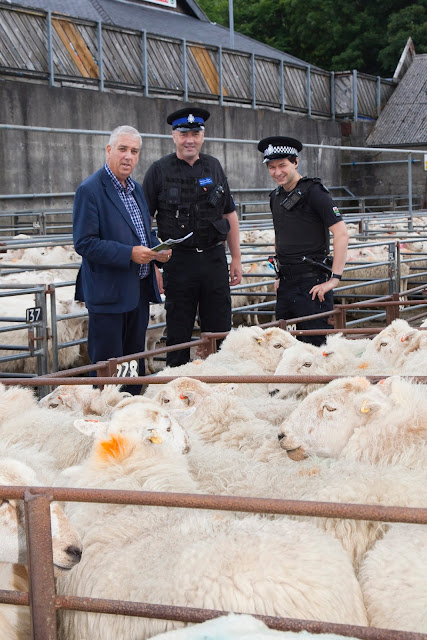 * Arfon Jones, Police and Crime Commissioner for
North Wales, on his visit to Dolgellau
Farmers Mart to meet members of the Rural Crime Team.
He is pictured with Dewi Evans and Rhys Evans.

A police boss has pledged to use high tech methods to combat rural crime.

Mr Jones, a former police inspector who was raised on a farm in Harlech, was speaking during a visit to the farmers' mart in Dolgellau when he also promised to support the pioneering Rural Crime Team which was set up by North Wales Police two and a half years ago.

Mr Jones said: "I used to come to the mart in Dolgellau every week and it's great to be back.
"It's important that the rural areas of North Wales are given the same attention by the police as the urban areas.

"I am determined to make sure the police station in Dolgellau remains open 24/7 because this area needs to be policed properly.

"The work of the Rural Crime Team is tremendously important and they are well respected by farmers and others who are interested in the countryside and wildlife.

"The team have been highly successful since they were established two and a half years ago and have won a number of richly deserved awards.

"A lot of forces are looking to this team as a benchmark of best practice so they can try and emulate what's happening in North Wales.

"I am determined to continue funding the Rural Crime Team. In the grand scheme of things, they don't cost a great deal and I would hope that a number of our partners like Natural Resources Wales would contribute because they also benefit from the team's work.

"Farmers are having a tough time so any losses incurred because of theft, whether it is livestock or machinery, can be a hammer blow to them.

"There is a real need for ANPR in rural areas so we know when criminals are in the area.

"They don't use main roads and use instead smaller country roads so we need to a have mobile ANPR kit so it can be used on these back lanes to see who is using them.

"ANPR cameras can read a registration number and instantly check it against database records of vehicles of interest. Police officers can intercept and stop a vehicle, check it for evidence and, where necessary, make arrests.

"It's important that we are not just reactive but that we are also proactive so that we can stop rural crime taking place before it happens.

"Our rural areas are geographically very large so we need technology to help us in our fight against countryside crime and to catch to offenders.

"This technology is already used in the urban areas and it's important that rural areas like Meirionnydd enjoy the same level and quality of policing.

"The message to criminals is clear. There is no welcome for them in North Wales and if they come here they will be caught."

The support of commissioner was welcomed by PC Dewi Evans who has been working with the Rural Crime Team since it was established two and a half years ago.

He said: "We have been successful in reducing farm crime and rural crime.

"We have cut wildlife crime by 80 per cent and we reduced farm crime by 40 per cent early on and we are maintaining that level.

"We have a very good relationship with the people who live in the rural areas as well as other agencies like the Snowdonia National Park and Natural Resources Wales, along with the farming unions.

"We have some excellent contacts and that has been a crucial part of our success.

"The fact that the new police and crime commissioner is so supportive of our work is great news for us and more importantly for the people who live in the countryside.

"The continuing support of the team will help us ensure that rural crime remains at a low level."

The commissioner also met Huw Jones, the county officer of the Farmers' Union of Wales, in Meirionnydd, who is fan of the Rural Crime Team.

He said: "The role of the Rural Crime Team is very important and it is something we had been calling for.

"It is important that we see them in marts like this one in Dolgellau and that farmers get to know the members of the team so that they know who to turn to if they need them.

"The farming community can also act as the eyes and ears of the police in the countryside."
Posted by llanblogger at 8:15 AM