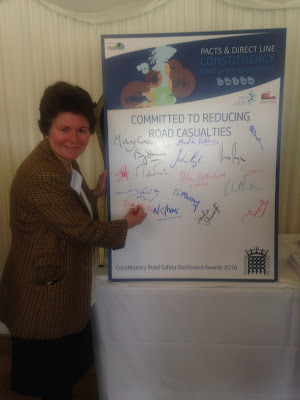 Her questions coincide with a new Prime Minister taking office.

The Clwyd South Labour Member was awarded the title of 2015 Parliamentarian of the Year by road safety charity Brake.

Now, she is calling on Theresa May and her new Justice Secretary to sort out a Government review of motoring offences and penalties with immediate effect.

Ms Jones said: "The Government promised a review of motor offences and penalties in 2014. I appreciate now that this is now being considered alongside a review of other offences.

"However it is not fair to the victims of road traffic accidents and the families of those killed on our roads that they should have to wait any longer. Everyone knows that the current sentences for driving offences are a nonsense. That's why I am calling on the new Prime Minister and her Justice Secretary to get this all sorted as soon as possible."
Posted by llanblogger at 7:39 AM