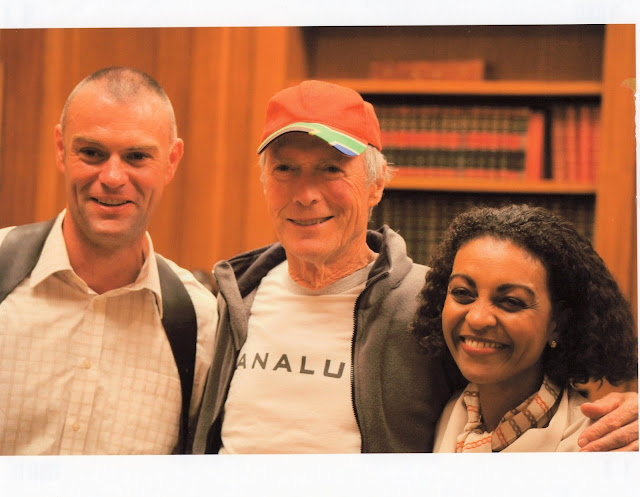 A Hollywood actor who has worked with movie greats Clint Eastwood and Morgan Freeman is heading for a blockbuster performance in North Wales.

One of Julian's next projects will be what's likely to be the most expensive film in cinema history, Justice League, which is based on the DC Comics superhero characters.

He rose to international prominence after his leading role in the 2009 film, Invictus, in which he played Etienne Feyder, the head of Nelson Mandela’s bodyguard team.

According to Julian, 48, working on the Oscar-nominated movie which was directed by Eastwood and co-starred Morgan Freeman and Matt Damon was a "wonderful experience".

This will not be the first time the Anglesey-born actor will have been on the Llangollen stage as he introduced an evening concert at the festival more than five years ago.

Julian, a married father-of-three, said: “This will be a very different experience for me and narrating an opera isn’t something I have ever done before. This will be something new and I’m chuffed to have been asked to do it.

“My role as narrator is to set the scene for the audience so they know what is happening and what each scene is all about. It will be new for me too as I have never worked with opera as an art form before.

“I’m looking forward to seeing Kate Aldrich and Noah Stewart. I have only been able to check out Kate’s profile on the internet but it’s clear she is a top, top star on the world stage. And I believe Noah Stewart is already a firm favourite with the Llangollen audience.

“I don’t often get back to North Wales as much as I’d like but always enjoy Llangollen. It’s been too long since I was there and I’m delighted to be going back.

“I’m really busy at the moment and have just finished filming a new film for Warner Brothers, Justice League, which is a new superhero film based on the DC Comics superhero characters.

“I’m not allowed to say yet what part I play but let’s just say I’ve a role in what will likely be the most expensive film ever made. It was filmed at Warner Brother’s studio at Leavesden as well as at various locations around the UK and Iceland.

“Directed by Zak Snyder it stars Ben Affleck, Jeremy Irons and host of A-list actors. I’m just happy to have been involved and I’m looking forward to the movie’s release which will be next year.”

Julian admits his big break came when he landed the role in Invictus which told the story of events in South Africa before and during the 1995 Rugby World Cup which was hosted in the country just after apartheid ended.

“There are no huge egos, no airs and graces. These are just ordinary people doing an extraordinary job. They work incredibly hard and Clint Eastwood in particular I found to be a really decent and talented man.”

“I’m busy with a few projects of my own at the moment. I’m the executive producer for a British film, Rugby Girls, which will tell the story of the first women’s rugby world cup which was held in Wales in 1991.

“It’s an amazing story and we are hoping to begin filming later this year.  I’ve also being doing plenty of television stuff and am working on a project for a new TV fishing series.”

He said: “The Llangollen audience will be treated to a world-class opera stars in Kate Aldrich and Noah Stewart.

“No one performs the role of Carmen like Kate can; she is truly world class and has performed at the world’s very best opera venues. It is her signature role and she is rightly known as the Carmen of her generation.

“And who could forget the reception tenor Noah Stewart received when he performed at Llangollen a few years ago and sang the Welsh hymn, Calon Lan.

“This will be Noah’s third appearance at Llangollen and he is already a huge favourite with the knowledgeable Llangollen audience.

“It might be the first concert of this year’s festival but it’s an event that going to set the bar very high and will be, undoubtedly, a concert that will live long in the memory of every one privileged to witness it.”

For more information about the festival and the box office please visit www.international-eisteddfod.co.uk
Posted by llanblogger at 6:45 AM