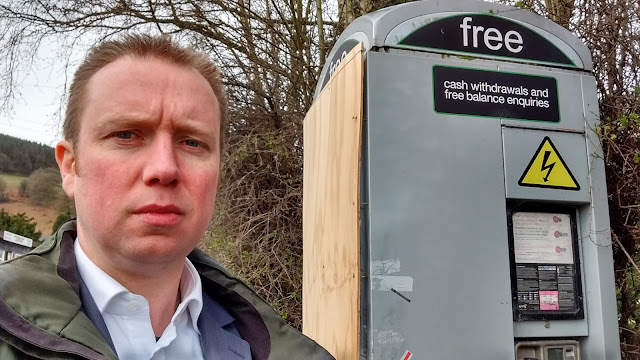 Bank lending to local businesses in the Ceiriog Valley has dropped by 30% in just two years after it lost its last bank, according to Plaid Cymru research.


The collapse in lending is mirrored in other communities that have lost local bank branches, according to a new report published by campaigning group Move Your Money UK.


Move Your Money UK’s report shows that bank branch closures dampens lending growth among small and medium-sized businesses by 63% on average. This figure becomes 104% when the last bank in town closes.


Plaid Cymru spokesperson for Clwyd South, Mabon ap Gwynfor, who has been campaigning against the closure of numerous bank branches in the constituency, said that while branch closures might make sense for the banks themselves, they were having a " devastating" impact on local communities and businesses, adding to the " slow death" of High Streets across Wales.

He added: “Many of the bank closures have happened relatively recently here, so we do not know the full impact yet.

"The LL14 area, which covers Rhosllanerchrugog, Penycae, Cefn, Ruabon and surrounding areas has also seen a drop in lending to SMEs from £14,000,000 in the final quarter of 2013 to £12,300,000 in the final quarter of last year, and has also seen banks close in Rhos and Cefn Mawr, but the area is yet to feel the full impact of the closure of HSBC in Ruabon.

“These are not just numbers on a spreadsheet, they represent economic confidence in an area, they represent investment, direct and indirect employment, they show a significant loss to the local economy and community.

“While the Government have come up with a banking protocol, which is toothless and frankly not worth the paper it’s written on, they must  enforce the Banking sector to make a full community Impact Assessment before any closure, and if that assessment proves negative than they should remain open."


LL20 7 is the postcode area for the Ceiriog Valley and southern parts of Llangollen, Trevor, and Froncysyllte.

Both the Ceiriog Valley and Cefn Mawr lost their last banks in 2011, and Llangollen has also seen several banks close in the last two years.

Mr ap Gwynfor said, "This is bad news for businesses in Llangollen and the area, who are now finding it harder to invest and grow their businesses."

Clwyd South only has one bank branch left - Barclays in Llangollen.
Posted by llanblogger at 6:39 AM