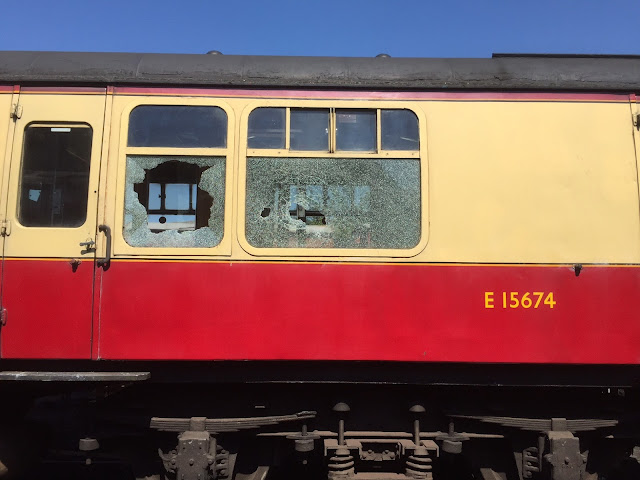 * The damaged windows on one of the coaches.

Police are appealing for information after vandals struck at Llangollen Railway.

Hundreds of pounds worth of damage was caused when two windows were smashed on one of the railway coaches on Monday July 18.

PCSO Delia Bellis said: “We are keen to speak to a group of youths who were seen near the railway after 6pm last Monday.

"The railway is run predominantly by a group of volunteers, including youngsters who are part of the Railways Youth Group, who give of their time to ensure everything runs smoothly.

"They now feel aggrieved by the damage which has been caused."

* Anyone who may have witnessed the windows being smashed is asked to contact PCSO Bellis at Llangollen Police Station on 101 quoting reference is RM160113025. Alternatively call Crimestoppers anonymously on 0800 555111 or contact the control room direct via the new web live chat http://www.north-wales.police.uk/contact/chat-support.aspx

Posted by llanblogger at 4:55 PM