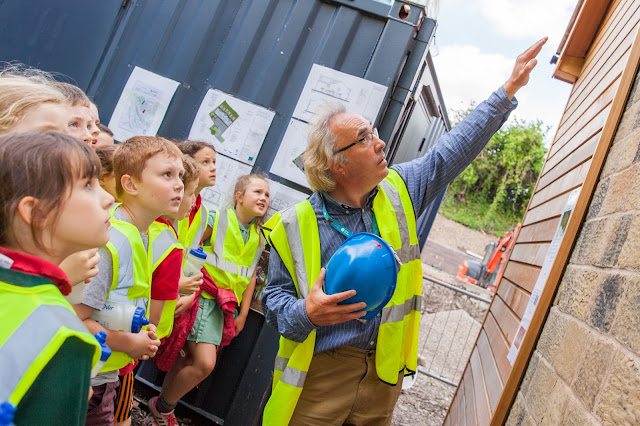 * Ysgol y Gwernant pupils are shown the special building put up for the bats by Bryn Davies, development manager for Grŵp Cynefin.

Children from a Llangollen primary school have visited an affordable homes development to see how a housing association is working around a colony of bats.

Pupils at Ysgol y Gwernant were at the site of the old Cottage Hospital in Abbey Road to learn more about the ecological nature of building homes for local people with wildlife present.

“Sometimes building homes brings with it some additional challenges, and Llangollen has been an example of that,” explains Bryn Davies, development manager for Grŵp Cynefin.

“We knew before we purchased the site that we had a colony of soprano pipistrelle bats to deal with, so our environmental expertise kicks in from the outset.”

The design and build planning for the site, which will become home to six three and four bedroom houses, and six two bedroom flats, has to take into consideration the bats breeding season.

Mr Davies added: “Bats are a Protected Species, so we had to prepare our building plans around the bats and obtain the licence from Welsh Government. The initial surveys that were carried out registered 656 soprano pipistrelle bats around the site during one particular evening.

“Our building period was therefore delayed as we had to wait for the bats to leave the old building once their breeding season finished at the end of the summer. We then set about the task of constructing a new home for them.

"We had to work within the winter months to build their new home, which will also serve as a bin store, as they would soon return to the site ready for the next year’s breeding season.

“We built a new stand-alone building, cedar clad with plenty of access points for the bats - which mimics the old hospital structure where the bats had been living and breeding successfully since the 1990s.

“The bats lived in the cavity of the building, so it was important that we replicated the environment that encouraged them to move into the new building once the roosting period began in May.

"In the former hospital building the bats were using a section of the building because of its aspect to the sun. It heated the structure during the day carrying and retaining the stored heat in the evening making it an ideal breeding ground. The females left the young at night to forage whilst the young were left safe in a warm environment.

“We’ve replicated these conditions in the new building, and are delighted to say that the bats have returned in their droves. The pupils of Ysgol Gwernant visited the site recently and we shared with them how complex it can be to build new homes, especially here in Llangollen.”

The school's Eleri Jones, who visited the site with the years three and four youngsters, said: “The pupils enjoyed their visit to the former hospital site.

"It was interesting to hear about the bats and how Grŵp Cynefin had to build a new home especially for them.

"It formed part of our recent Eco Council Platinum Banner Award which tied in with their local environment here in Llangollen. We also saw the houses themselves under construction on site, and of course, the big machines were a big hit with the pupils.”

The development on site is said to be progressing well with an estimated completion date of spring 2017.
Posted by llanblogger at 6:41 AM