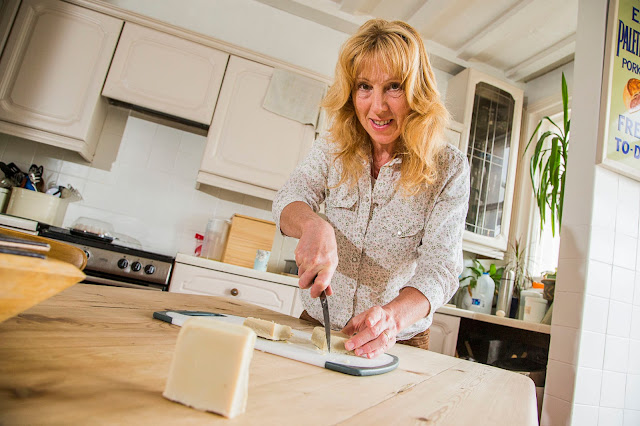 * Carol Allen makes some of her goats' milk soap.

A former teacher who launched a company making handmade soap from goats' milk during a career break following a freak accident has won a major contract in China.

According to Carol Allen, who set up Llanvalley Natural Products six years ago, the Hamper Llangollen food festival has helped propel her business to success over the past five years, putting her in the right place at the right time to secure new customers.

The 58-year-old, who makes traditional soaps, face creams and lip balms from Welsh goats’ milk produced at her small holding in Froncysyllte, Llangollen, now supplies her products to local B&Bs, gift shops and specialist beauty outlets based in the North West and North Wales.

But the brand is fast gaining popularity further afield thanks to a chance encounter during the festival – and Carol is now celebrating a major new contract for the Ai Zhi Zao beauty store based in the XuHui District in Shanghai.

“I can’t believe quite how much it has all taken off. It still surprises me,” said Carol, who has four grown up sons.

“I had planned to go back to teaching one day before I started to do this and now I just don’t have the time.

“It’s always been my dream to live for my work rather than work for my living and I think I’ve achieved that.”

Carol had been a design/technology and home economics teacher for more than 10 years before embarking on a soap-making hobby.

The businesswoman was teaching food and textiles at Ysgol Bryn Alyn in Gwersllt, Wrexham, when she was involved in a freak accident on her farm. She had been moving an electric fence when her horse entangled its leg in the fencing, which was turned off, and bolted across a field, dragging her with it.

Carol dislocated her elbow and injured her shoulder, losing the movement in her left arm for more than a year. Insurers said it would be too risky for her to return to work and operate machinery while she recovered, and as a result she resigned from her position.

“I didn’t want to be living on sickness benefit but it was quite by accident I got into making soap,” she said.

“I already had three goats at the time. I told the local man I’d bought them from that they were producing quite a bit of milk and that I didn’t know what to do with it all, aside from making cheese and drinking it.

“He suggested I made soap out of it. It was the first time I’d ever thought about it.

“He gave me a recipe his grandmother had given him and I looked online for different techniques. I did a lot of research and experimentation and there were many triumphs and mistakes along the way but eventually I had developed a really good soap recipe.

“Originally, we were using it ourselves and giving it to friends and family but soon enough I ended up with a chest of drawers full of it so I took it to the Erddig Christmas Market in Wrexham and it all sold. That was definitely the light bulb moment.”

Before long, Carol was developing her own packaging and gift assembles to sell at other local craft markets, including Hamper Llangollen.

Her design background and packaging knowledge was put into practice and she found that she could be self-reliant in every area of her business.

Within a few months of launching, she was exhibiting at the Llangollen Food Festival and has been back there every year since.

Carol is in the unique position of being able to exhibit beauty products at the festival because they are made from food ingredients including olive and coconut oil and Welsh spring water which she collects from the valley where she lives to give her products an authentic Welsh feel.

“I started exhibiting at the Llangollen Food Festival almost as soon as I launched my business,” she said.

“It’s definitely helped me and I’ve got a big local following now. The same people come back to see me every year and say they’re really glad I’m back. It’s lovely to have that local, friendly relationship. I recognise the customers and they recognise me.

“I’ve also got lots of regular online customers who live further away but who arrived at the festival on coach trips. It’s really helped my business and I would recommend every business specialising in hand-produced products to give it a go to get their name about.”

It was while attending Hamper Llangollen that the editor of a national magazine was introduced to her soap products.

A magazine feature followed which was recently picked up by the owners of the Shanghai beauty chain. Before long Carol had secured her first international order.

“They like it because it’s goats’ milk and made in Wales,” said Carol.

“I send off a consignment every quarter and they buy two types of soap: the Welsh honey and oatmeal and the camomile and eucalyptus essential oil, both of which feature local hand-pressed flowers, as well as various lip balms.

Carol, who now has four goats; Billy, Rosie, Eira and Wennol, admits there could be more major contracts on the way but she is currently running the business singlehandedly, which is giving her little room for growth.

“I used to enjoy teaching a practical subject but this is more self-satisfying. Teaching is a very rewarding career but this career chose me really.

“It has driven me as much as I have driven it. I’m working pretty much 18-hours a day but it fits in with other things and it’s not like work.”

With another feature in a coffee table magazine due to be published this year and plans to seek official organic status, it won’t be long before more orders beckon. But until then, Carol says she is firmly focused on the Llangollen Food Festival – her favourite event of the year - and meeting her oldest customers again.

He said: "It is very pleasing to know that we provide an effective shop window for companies competing for attention in a crowded market place and I would like to congratulate Llanvalley on securing this exciting order from China.

“Thanks to a whole host of indigenous companies, North East Wales is rapidly establishing a reputation as a centre of excellence for high quality cuisine.

“The food festival is a perfect shop window for the companies who form the backbone of our rural economy.

"The location of the Pavilion is absolutely spectacular - I can't imagine that any other food festival in the UK has a more beautiful setting."

* For more details about Hamper Llangollen 2016 visit www.llangollenfoodfestival.com and for more information about Llanvalley Natural products go to  www.llanvalley.co.uk