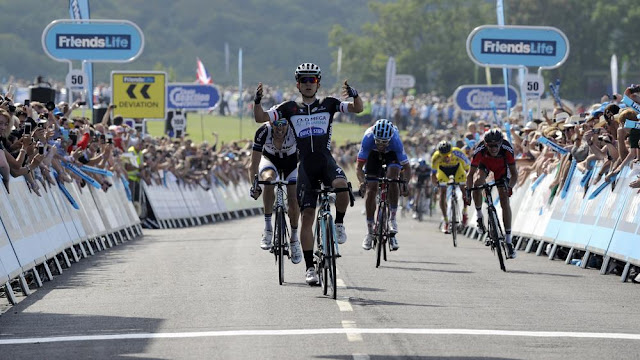 * The world's top riders will race from Denbigh to Builth Wells.


Britain’s most prestigious professional cycle race, the Tour of Britain, will return to Wales for two stages once again this September.

Wednesday 7 September sees the world’s top riders racing from Denbigh to Builth Wells, where they will finish on the Royal Welsh Showground.


Thursday 8 September will then see the world’s top cyclists racing from Aberdare across South Wales through Rhondda Cynon Taf, Caerphilly County Borough, Torfaen and Monmouthshire before a finish in Bath.


The two stages will include almost 300-kilometres of racing on Welsh roads, with Stage Four from Denbigh to Builth Wells the longest of the 2016 race at 218-kilometres also including the most ascent of any leg, with over 4,000-metres of climbing.


Stage Four will begin from Denbigh town centre at 10:30 and is expected to finish on the Royal Welsh Showground at Builth Wells at around 15:29.  It will mark the first time that Denbighshire has hosted a stage start of the Tour of Britain and the first time that a stage has finished in Powys.


Flintshire will host an intermediate Yodel Sprint, sponsored by parcel delivery company Yodel, in Mold and the day’s opening SKODA King of the Mountains climb to the village of Rhydtalog.


Two further SKODA King of the Mountains climbs will come at Bwlch-y-Safn in Denbighshire’s Berwyn Mountains and at Dyfnant forest in Powys, with the final Yodel Sprints in the villages of Foel and Newbridge-on-Wye.


The Tour of Britain will resume a day later from Aberdare Park in Rhondda Cynon Taf at 11:00 on Thursday 8 September for a 205-kilometre stage to Bath.  From Aberdare the stage will pass through Mountain Ash, Ystrad Mynach and Pontypool, before the opening Yodel Sprint on Monmouth Road in Usk.

The Stage Five route continues through Monmouthshire to Tintern, crossing the River Wye into Gloucestershire via the Bigsweir Bridge north of Llandogo.


Anne Adams-King, Chief Executive Officer at Welsh Cycling said; “Welsh Cycling is delighted to once again welcome the Tour of Britain to Wales. A stage start is a first for the town of Denbigh, and to finish at the heart of Wales at the Royal Welsh Showground in Builth Wells will be spectacular. We are also pleased to see Stage Five depart from Aberdare as the race travels across the border to finish in Bath.


“We have a fantastic summer of cycling activities here in Wales for everyone to enjoy. With our elite athletes competing in the Tour de France and Rio Olympic Games, and major events like the Tour of Britain on our doorstep, we hope that Wales will be inspired to cycle this summer.”


Councillor Huw Jones, Denbighshire County Council’s Cabinet Lead Member for Tourism, Leisure and Youth “We are absolutely delighted to have secured the start of Stage Four of the race this year, as we feel it will have great benefits to the tourism industry here in Denbighshire, as well as showcasing what the region has to offer.


“We are working closely with our colleagues in Flintshire and the rest of North Wales to make sure that the level of public support shown over recent years is repeated again this year.


“North Wales is fast earning itself a reputation for hosting and staging major events, with the Tour of Britain a prime example of how councils and event organisers work closely together to deliver these spectacular events.”
Posted by llanblogger at 6:42 AM