Eisteddfod is first to be presented with new peace award 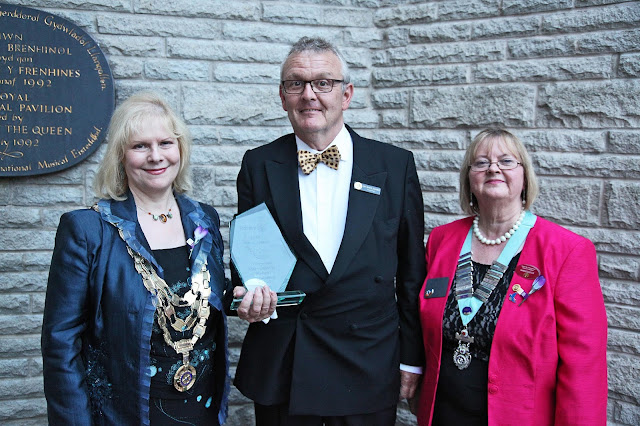 Llangollen International Musical Eisteddfod has been honoured for its contribution to world peace.

The iconic festival was presented with a Rotary International Peace Award by the organisation’s 1180 District during a special ceremony on the pavilion stage.

And the leading Rotarian whose brainchild the accolade is says that she couldn’t think of a more deserving recipient than the festival itself, which is this year celebrating 70 years of furthering peace and harmony across the world through music and the arts.

The festival was founded in 1947 in the aftermath of World War Two to bring peace and harmony to a world riven by conflict.

Ever since, the picturesque town in the Dee Valley is the place where once a year Wales meets the world in a melting pot of culture and colour.

Molly Youd was only recently appointed governor of the huge 1180 Rotary district, which covers an area stretching from Southport in the north to Mid Wales in the south and from Angelsey in the west to Crewe and Nantwich in the east, and is the first woman to hold the position.

Molly, who lives in Rhostyllen near Wrexham, said: “I love the Eisteddfod and for the past 15 years have been in charge of the Rotary tent on the festival field.

“That’s how I came up with the idea of the peace prize together because we share the same ideals of peace and international understanding.

“As this year has seen the 70th Eisteddfod we thought it was most appropriate to make the award to the festival, which has done so much in the cause of peace over all those years.”

Molly added: “Apart from being in charge of the Rotary stand I’ve also had the honour of being an official Llangollen Ambassador for the past six years, and I thought about the award a while ago.

“Watching the presentation of the first one to the Eisteddfod during the concert was such an honour and also very fitting in a number of ways because, apart from being the 70th festival, this year is also the centenary of the Rotary Foundation, which is our own charity, the 30th anniversary of women members in Rotary and the 10th anniversary of the Rotary Young Citizen’s Award, which is also presented annually.”

Eisteddfod Chairman Dr Rhys Davies was grateful to Rotary International for the award.
He said: “Rotary International is a truly wonderful organisation and the partnership between the Eisteddfod and Rotary is the perfect match because we have in common the work we do to promote world peace and understanding.

“I felt proud and very privileged to accept the award on behalf of the Eisteddfod and I'm sure our partnership will go from strength to the strength in future years.”
Posted by llanblogger at 6:39 AM