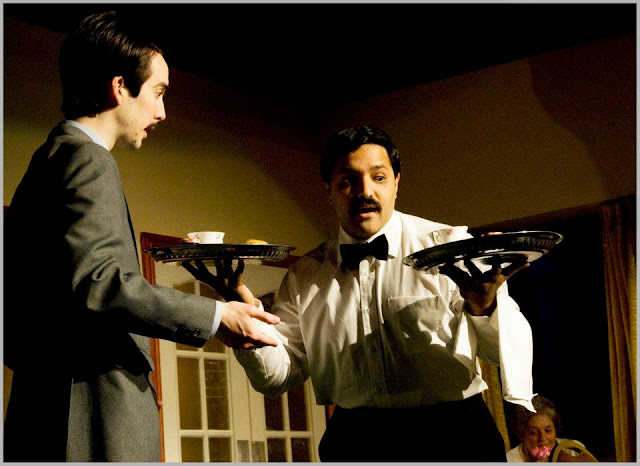 * Ally Goodman as Basil and Richard Mascarenhas as Manuel in
a scene from Fawlty Towers.

Tripadvisor would have had a field day with comments about Fawlty Towers if it had been around in the 70s.

And every excruciating minute of a stay at this very dodgy Torquay hotel created by John Cleese and Connie Booth for their iconic TV series is currently being superbly recreated live in Llangollen.

Back in 2012 the Twenty Club amateur players took three episodes of what many believe is one of the UK’s finest ever TV sitcoms and turned them into a stage production which ended up as a sell-out.

And, by popular demand, they’ve just done the same with another trio of shows to bring the awful Basil back to manic life at the Town Hall over the next couple of days.

These include the ones entitled Communication Problems, Waldorf Salad and Basil the Rat.

Many of the 2012 cast are reprising their roles, including Ally Goodman as the impossible Basil, Helen Belton as Sybil, his over-coiffeured, domineering wife, and Richard Mascarenhas as bumbling but loveable Spanish waiter Manuel.

Goodman was born to play this role, capturing as he does every nuance and twitch of the raving mad hotelier.

Ms Belton gives Sybil all her syrupy charm with a mailed fist hiding just below the make-up.

And what could be better than watching Mascarenhas portray Manuel pleading hilariously yet pathetically with Fawlty not to “keel” his pet rat after it goes on the loose just as a health inspector calls.

Each is brilliant in their part and capable of wringing maximum laughs from every line.

New members of the cast this time include Carys Stallard as the calm and capable Polly along with Ian Wright who takes on the role of the oft-confused Major.

There was magnificent support also from Bill Hughes doubling up as two very different awkward hotel guests and Lyn Aston as the elderly lady with a hearing problem who tangles with Fawlty in Communication Problems.

The show is once again directed with aplomb by Chrissie Ashworth.

Now, what about the remaining six episodes, especially the one where Fawlty tries to whip to death his broken-down car?

Fawlty Towers is on again tonight (Friday) and twice on Saturday – there’s a matinee at 2pm.

But as there was almost a capacity audience at yesterday’s first night, it would be advisable to do everything possible to secure a seat.

Tickets are available at tinyurl.com/fawltytowerstickets or via the Twenty Club page on Facebook.

The Twenty Club is one of the oldest dramatic societies in North Wales.

It was founded in 1946 with 20 original members, which gave the club its name.

The club presents two plays a year, in autumn and spring, with a mixture of comedy, drama and period productions.
Posted by llanblogger at 7:13 AM